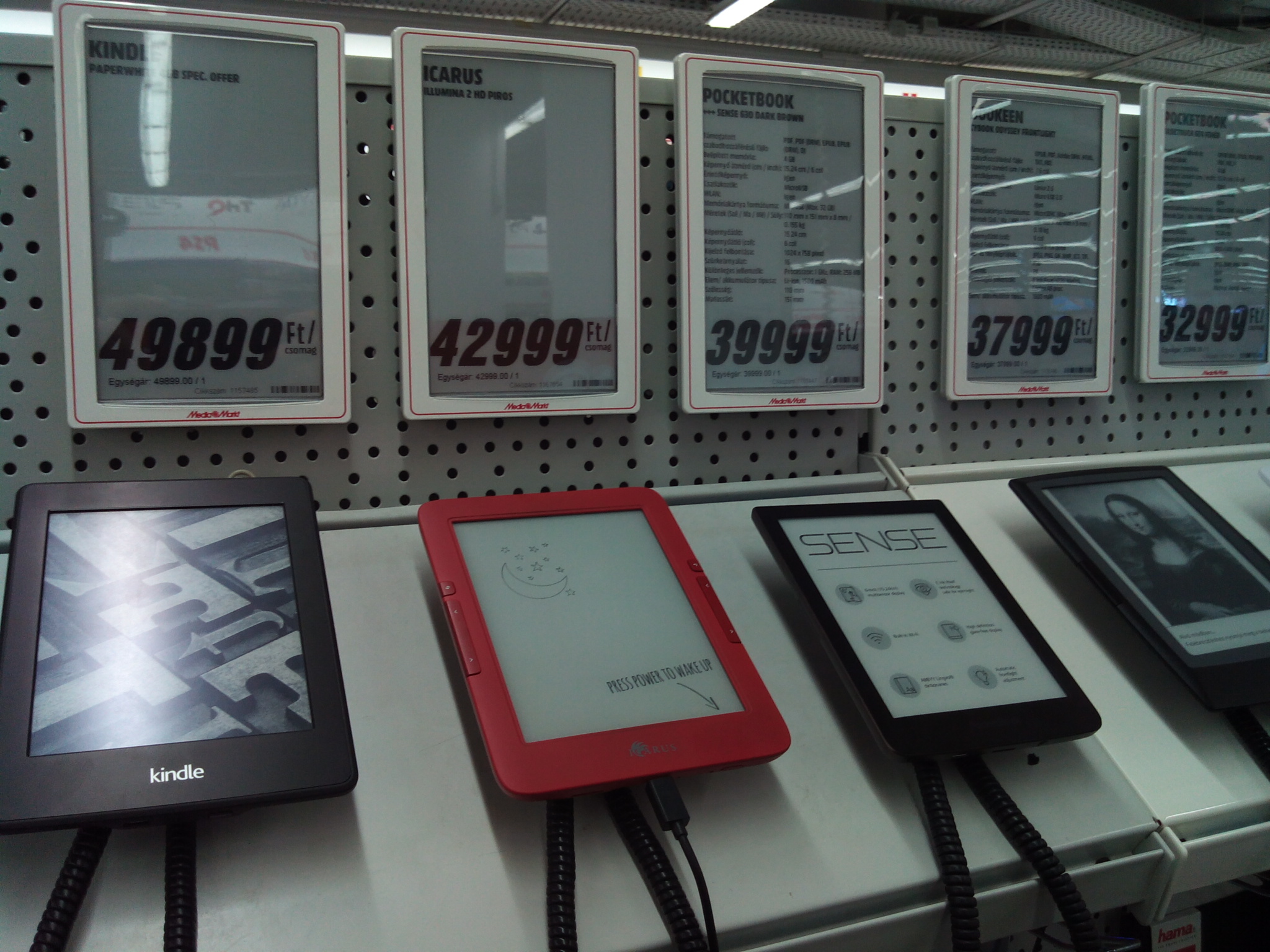 Here’s a picture full of unintended ironies. Just ignore the Hungarian. Focus on the lineup. You have a range of ereaders, including a Kindle, advertised and priced by digital signs that are almost as good ereaders as they are. And if you can see this in an incompletely developed market like Budapest, on perfectly average retail shelves, what can you expect elsewhere?

The actual signage unit could certainly be better as an ereading screen, sure, but it’s passable, as you can see below: 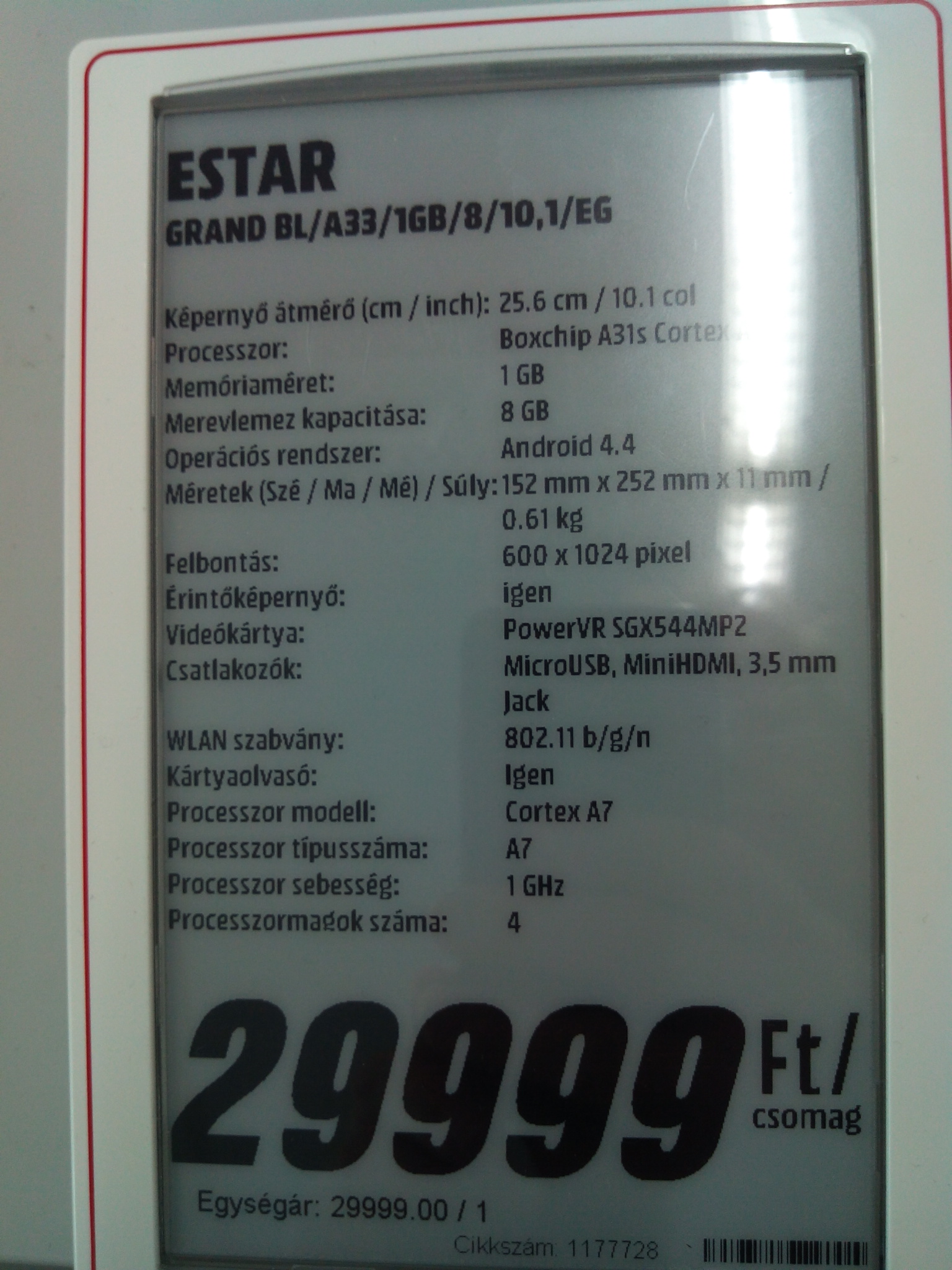 The unit is made by Imagotag, an Austrian e-labeling company. “Our solution is based on brilliant e-paper technology with excellent visual characteristics,” their website says. The actual unit shown in the pictures, the G1 Retail, boasts a “5-year lifetime with 8 updates per day,” and “up to 1000 label updates per hour.” Imagotag typically sells these in boxes of 40 units, and one implementation in Germany for an unnamed client cost €35 million ($38.3 million) across 250 stores, or €140,000 ($153,280) per store. I can’t find a unit cost for the actual devices, as Imagotag and its suppliers prefer to work in bulk orders, but I can’t imagine they cost much, as similar units from Chinese suppliers start at around $4 apiece at Alibaba. Meaning that each of the epaper signs in the picture above may have cost subtantially less than one tenth the price of a basic Kindle.

With these kind of costs, where on earth is the justification to continue to print books? Let’s leave aside the question of reading preferences, and consider production costs. With the Imagotag system and its ilk, we’re only looking at a complete solution that’s already dirt cheap – what about the components? At this rate, you can envisage a day not too far distant when the production cost of epaper approaches that of old style paper. What justification are publishers going to have to produce books when the production cost of an ereader falls below that of the average paperback? And they’re already there with existing technology – what about the new rollable displays and battery-paper pulp tech just around the corner? The epaper market isn’t even especially competitive, with Eink locking up around 95 percent of the ereader market. Just watch what happens to prices when Chinese OEMs really get their teeth into it.

Now let’s move on to the ecological angle, and the colossally wasteful and destructive world of Big Publishing. This is an industry that sends back up to 50 percent of its products to be remaindered or pulped. What kind of post-Paris ecological excuse can there be for a process so destructive of trees? And any anti-ebook Luddites who appeal to veneration for the printed word might care to remember: who are the world’s biggest book-burners right now? Not ISIS: publishers.

I do love books, as it happens. I can identify with Howard Jacobson’s book-hoarding obsession – I certainly did enough of it myself. I hope and expect that beautiful books will continue to be printed. Tartarus Press, founded by another bibliomane, could serve as a model of the small press of the future: turning out beautiful and very expensive hardcover volumes in print runs of just 300 copies, while also creating parallel ebook print runs at a fraction of the price.

Meanwhile, big publishers will continue to churn out pulp. Only not the paper kind. And at least you don’t have to warehouse or burn driveling etext.