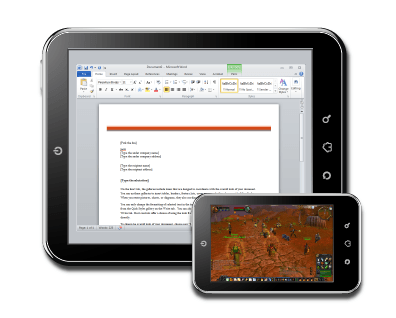 Forget the competition between Android and Windows phones and tablets: your Android mobile devices may be able to run Windows apps soon. That’s the promise of the CrossOver for Android team at CodeWeavers Inc., who are offering signup for a technology preview of their Android platform. “CodeWeavers believes that you should be able to run your favorite Windows software on whatever operating systems suits your fancy,” the company writes. They’ve kept that promise for Mac and Linux, using the Wine Project, and now it looks like they aim to do the same for Android.

Not every Android device will run CrossOver for Android in its current form at least. CodeWeavers states that: “You will need an Android tablet with an Intel processor. A tablet with 2GB of RAM or more is necessary to run most real-world Windows applications.” This spec embraces the Lenovo Yoga series, the Dell Venue tablets, and the latest ASUS Memo Pad 7, but CodeWeavers emphasizes that there are many more options out there. It’s unclear whether the platform can be rolled out for other devices in future, though.

I don’t see this as being much of a gamer changer for ereading. After all, both Windows 10 and Android now support just about all popular ebook formats and platforms. That said, if you want to use the odd Windows app on your Android mobile device, you may soon have the option, thanks to CodeWeavers.