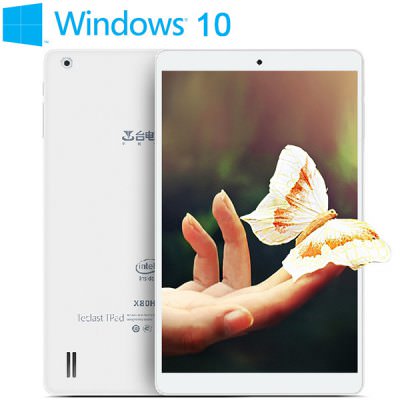 New-generation Chinese-made tablets based on Intel’s latest Cherry Trail mobile CPU are already coming to market – at $99 a pop. Chinese no-brand maker Telcast is offering a presale special at GearBest on its its 8-inch Teclast X80 Plus Tablet PC with an Intel Atom X5 – Z8300 64bit quad-core 1.44GHz CPU and Windows 10 at just $99.21, with free flat-rate shipping.

Cherry Trail is the same CPU to be found in Microsoft’s own Windows Surface 3 – albeit a higher-end version from the same range. Intel’s selling points for its new line include the ability to run full Windows 10 (as well as other OSs like Android), and up to twice the graphics performance of the preceding Bay Trail series.

All this suggests that low-end Windows 10 tablets are going to become increasingly competitive. And for all Chris Meadows’s reservations about Windows 10 e-reading apps, I can see these becoming a more and more popular solution going forward. Whether a $99 Windows 10 tablet is going to be a persuasive competitor to a $50 Amazon Kindle Fire tablet, though, is another question. An extra 50 bucks with no Amazonesque brand power behind it may be not much of an inducement for many budget buyers.