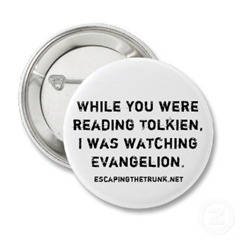 First, Cory Doctorow heard from the Tolkien estate’s lawyer that the Tolkien estate was actually not involved in Zazzle’s takedown of the “While you were reading Tolkien, I was watching Evangelion” button—Zazzle did it all on its own.

According to [lawyer Steven] Maier, "Zazzle has confirmed that it took down the link of its own accord, because its content management department came across the product and deemed it to be potentially infringing."

The weird thing is, as I mentioned in that previous story, there are still plenty of Tolkien-related products on Zazzle’s store. I wonder if they were more concerned about it infringing Evangelion’s trademark, especially with a newly-rebooted series being available? However, there are still a number of other Evangelion-related products on the store, too—including the original button, which appears to be available for sale again.

In other news, Salon.com has republished a 2000 essay by the author of The Last Ring-bearer, the fanfic novel that reimagines the story from Mordor’s point of view, in which he explains why he wrote it. As Yeskov is himself an academic (a paleontologist), the essay is extremely dense, with a lot of thought put into it, and may be one of the most erudite justifications of fanfic you will ever read.

An apocryphal work – a different take on well-known events (whether from the real or an imaginary world is irrelevant: who are we to judge which is derivative?) — is totally different. Naturally, the world of an apocryphal work turns out differently, bearing at best the same relation to the initial world as that of d’Artagnan and milady Winter does to real France under Louis the XIII… or is it vice-versa? Actually, upon contemplation, what difference does it make? What’s important is that while the world of a sequel is a reproduction that adds absolutely nothing to the original, the worlds of the canonical and the apocryphal works can ideally make a "stereoscopic pair" that adds "depth" to the former. That is the field where all self-respecting authors have been playing ever since the aforementioned Dio, sometimes with quite decent results. (Interestingly, one can’t write a sequel to one’s own work, but one definitely can write a worthy apocrypha – take Stanislaw Lem’s "Local Session.")

Whether the freely-released novel will survive the Tolkien estate remains to be seen.