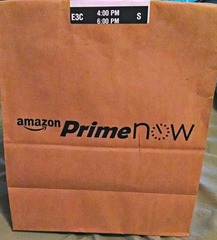 Amazon has a same-day delivery service called Amazon Prime Now. You can have items from a specific catalog delivered within two hours at no charge, or within one hour for an extra $7.99. There’s a $15 minimum order. It’s only available in selected cities right now (it just launched in six of them, including Chicago), but luckily, one of those cities is Indianapolis. So I decided to install the Android app and try it out. (There are also iOS and Amazon Android store apps.)

I’ve been needing some new USB cables, and I found some that added up to $15, and placed the order a bit after 2 p.m. (I included a tip of $2.50, about in line with the standard 15% of order value.) It told me they’d be delivered between 4 and 6, so I waited. One of the features of the app is that it shows your delivery person’s position on a map, though I noticed the position tracking seemed to be kind of sluggish—I often had to exit the map and go back to the menu and go back in to get the map marker to move. 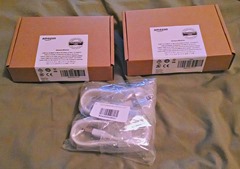 That being said, just after 5 p.m. the tracker showed the delivery person going to the front of my building and calling me. (Apparently he didn’t read the special instructions I put in that asked him to come around to the back first. Oh well.) I went up to greet him, and retrieved the paper bag full of cables.

All in all, it was a win. No need to go out and retrieve them from the landlord’s office, and they got here on the same day. It’s nice to have this service available. I could see me using it again in the future, assuming they have stuff that I need. I did notice they didn’t have all the kinds of stuff I’d necessarily be wanting (for example, only a small bag and only one variety of Iam’s cat food).

Update: A representative from Amazon just now called me, asking if I had any feedback about the service since this was its first day of operation. I suggested making sure the delivery people read the special instructions more carefully, and pointed out my issue with the tracking position not updating. He said he’d look into it.