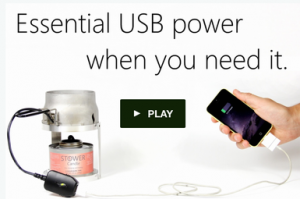 An emergency generator for your phone at time of power outages? That’s an offer in the form of a crowdfunded-campaign item called Candle Charger. It offers USB power when you need it, designed to keep phones souped up when the grid cannot. Two ingredients are involved: a candle and water, together behaving as a little indoor power plant for smartphones, to make sure you stay connected no matter what.

The TeleRead Take: It seems too good to be true, but apparently not—Biolite also makes a Peltier-cooler-equipped campstove for device charging in the backcountry. But given that the Biolite one apparently doesn’t charge phones terribly quickly, maybe it is too good. Either way, the Kickstarter has over a month to go, and it’s nearly halfway to goal, so it looks like it will probably succeed regardless. E-books by phone and candlelight, anyone?

Our project will seek to tell success stories of companies like Medium, but our ultimate aim is to take our analysis a step further to reveal strategies that other businesses and creators can use for their own endeavors. At the end of the process, we will put our findings together in an ebook, and we will publish an interactive tool that people can use to develop and evaluate their own open business models.

The TeleRead Take: With 270 backers, this project is a bit less than a fifth of the way to goal with most of a month still to go. I wish them luck, and I suspect they’re going to need it. This doesn’t seem like the sort of project that funds rapidly—it’s not a clever gadget, but a philosophical treatise, and while a lot of people are glad Creative Commons is there, it doesn’t strike me as the sort of thing lots of folks are eager to learn more about. But we’ll see.

Kickstarter has formed a partnership with Humble Bundle. The two companies have crafted a package featuring a variety of digital books and comics.

The TeleRead Take: It looks like an interesting package full of works that had been funded via Kickstarters. An interesting idea whose time has come, two partners who are made for each other, etc. As with all Humble Bundles, it’s a lot of good works for a little money, so why not?

This more or less confirms that the “feature” was indeed a bug with Siri. Unfortunately Apple has not responded to comments about the issue yesterday, nor have they come forward to acknowledge that they have fixed it either, leaving us to speculate as to why Siri might be prompted to call 911 when that command is issued.

The TeleRead Take: It does seem rather odd that telling Siri to charge your phone to 100% would prompt her to call the police. Some folks believed it was an intentional secret gimmick on the order of a hidden “hostage button,” but the patch seems to suggest that wasn’t the case. (Really, given the obscurity of the “feature,” it would be more likely to catch innocents than hostages anyway. You’d have to know about it to be able to make use of it, and if you did, the hostage-taker probably would, too!)

In an attempt to curb piracy, tracks downloaded for offline listening in Apple Music will not work on the new iPod Shuffle or Nano, reports 9to5 Mac. Apple Music tracks will work on an iPod Touch because Apple will be able to remove the locally stored tracks if the user cancels their subscription.

The TeleRead Take: Well, that makes sense. Really, iPods are a relic of the old paradigm where you listen to music that you actually own. A subscription service where you listen to music that you just rent needs an actual full-fledged computer, like the one in the iPod Touch. Also interesting is the bit later in the article noting that Apple seems to be de-emphasizing the iPod, removing it from the website’s top menu. Given that streaming services seem to be the wave of the future, that also makes a lot of sense.

The Department for Business, Innovation and Skills said when introducing the new regulations that they would cause only zero or insignificant harm, thus making compensation unnecessary. But Mr Justice Green, sitting in London, ruled last month that the evidence relied on by the government simply did not justify the claim that the harm would be “de minimis”. On Friday, in a further decision, he said: “It is clear that I should quash the regulations. I make clear this covers the entirety of the regulations and all the rights and obligations contained therein.”

The TeleRead Take: The fuss seems to be over the idea that the music industry should be compensated for this copying, and the law didn’t include a compensation scheme. Meanwhile, people have been and will quite happily continue to copy and rip CDs in the privacy of their own homes—who’s going to stop them? The overall effect seems to be a lot of judges and lawyers getting paid to argue over something everyone already does anyway, while the music industry continues not to get anything—not that they really should given that the customers already paid for the music after all. But so it goes. Typical that this kind of argument is still going on at a time when streaming services are becoming more popular than ripping oneself anyway.