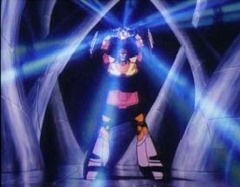 Dare – dare to believe you can survive
You hold the future in your hand
Dare – dare to keep all of your dreams alive
It’s time to take a stand
And you can win, if you dare

That seems to be the chorus that publisher advocates are singing these days: as publishers fight against the evil market-devouring Amazon much as the Transformers fought the evil world-devouring Unicron, the publishers should “dare” to open the Matrix of Leadership and pull all their titles from Amazon. You’ve got a post by Jeremy Greenfield on Digital Book World (found via The Passive Voice) exhorting Hachette to pull its books, issue a public statement saying that they did it because Amazon wouldn’t play ball, and double down with Barnes & Noble, giving them a better deal than they had been in return for extra-special treatment in stores and on the Nook.

It’s a crazy idea, but it might give Hachette the best chance to surprise and shock Amazon, and ultimately force it to terms Hachette can live with.

And then you’ve got good ol’ Bob Kohn, he of the amicus curae comic book, with an op-ed in the Economic Times of India and the New York Times. After spending most of the article ragging on that mean and nasty ol’ Amazon and the Department of Justice for ganging up on those poor innocent publishers who did absolutely nothing wrong in colluding illegally to raise consumer e-book prices (and entirely skipping over the fact that Apple was found guilty by a court of law for its part in that behavior), Kohn trots out this little gem:

So far, Hachette, to its credit, has been unbending. But Amazon still has its nuclear option. It would appear that unless Amazon backs down – through public pressure or government intervention – publishers will have no choice but to employ their own nuclear option: pull all their books from Amazon and throw their weight behind a law-abiding alternative. Perhaps the best solution would be an online marketplace controlled by the publishers – with the 30 per cent commission being split 50-50 with the authors in addition to the author’s royalty.

If consumers are inconvenienced by the switch, once again they will have only Amazon to blame.

Frankly, I’d love to see them try it, just to watch the fallout. But they won’t. Amazon accounts for 41% of the entire book market. Out of five randomly chosen new books or e-books that were sold online or in stores, two of them will have been sold by Amazon. And it’s more like two out of three for just e-books. If publishers are this concerned about Amazon nibbling away at their margins, do you think they’re going to want to give up that much of their marketplace in one fell swoop?

Granted, they wouldn’t lose all that business. Print books are print books, so at least some consumers would switch to ordering from Barnes & Noble, Books a Million, or even the publishers directly if they were to set up direct e-tail operations. But e-books are a much more complicated matter. As I noted in this piece, consumers are kept locked into Amazon primarily by how darned easy it is to buy books there. Even when the books are DRM-free and cheap on another site, the majority of consumers don’t want the hassle of anything more complicated than tapping a button to make the book magically appear on their Kindle.

Perhaps, as I suggested in that piece, the publishers could “kill” Amazon by pulling all their books from it. Amazon’s network effect would fizzle if it suddenly lost all the Big Five publishers’ titles, and its customers might be induced to switch to a different platform that had that publisher support. (Though it’s also possible that small publishers and self-publishers would have a field day, with big publishers’ books no longer around to compete for sales with theirs.)

But could the Big Five publishers survive long enough to reap the benefits? Their relationship with Amazon is a cross between an addiction and life support. If they try to go cold turkey, they might just flatline—a pyrrhic victory if ever there was one. And even if the publishers were willing to try it, their authors—who would be hit even worse in the pocketbook—would probably revolt. (Likely so would their investors.)

And Amazon’s position as the market leader doesn’t just affect the big publishers that way, either. Michael W. Perry, Amazon’s most ardent detractor in our comments (hi, Mike!) still self-publishes his books through Amazon as well as other places even though Amazon nibbles away at his profits with download fees and limits the pricing range at which 70% royalties are available. He says that he can make more money, sometimes much more money, by selling a copy of any given e-book anywhere else.

Yet for all that (and despite another commenter following him around like his own personal Greek Chorus to ask him whether he’s pulled his books from Amazon yet whenever he posts another anti-Amazon comment), he continues to sell them via Amazon, rather than pulling his books and asking that people buy them at some other store instead.

Michael W. Perry is like the big publishers in microcosm. He believes Amazon is doing him dirty, but he knows that he’d lose more money in lost sales by pulling his titles from them than he’d gain in gained sales at higher royalty rates from other vendors. because most Amazon customers would just buy other books from Amazon instead of going to other vendors for his. (Or, at least, so I am assuming. I’m sure if I’m wrong he’ll correct me in the comments. If he has a different reason for not pulling his books from Amazon, I’d like to hear it, and I’m sure his Greek Chorus would too.)

It’s the same for the big publishers—especially since their negotiations are staggered, so the effect of losing any one of those publishers’ books won’t be felt as severely by Amazon as losing all five of them at once would be. Indeed, if Hachette only accounts for 1.1% of Amazon’s demand-weighted products as Amazon claims, most consumers might not even notice. And Apple got along just fine without Random House, the biggest of the Big Six publishers (where Hachette is now the smallest), for a whole year.

Anyway, Hachette is taking a stand, but it’s unclear whether they can win, or even if they will dare.