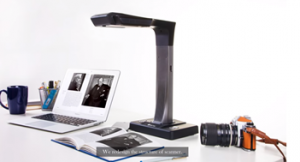 The Czur scanner will start shipping in February rather than January, but I’m not worried—Czur Tek says it is watching out for QC and not rushing. It has shared its revised schedule with me.

As TeleRead regulars know, the scanner stands out because you can buy it for just $199 and shipping via Indiegogo. The deal is good for the next 64 hours (I’m finishing this post at about 4:30 p.m. Washington, D.C., time). If the claims hold up, you’ll be able to scan a 300-page book in just five minutes. I’ve got oodles of paper books I’d love to digitize for my private use from my collection. More importantly, think what this could mean for endeavors such as Project Gutenberg and local libraries’ digitization projects. Not to mention possibilities for people with challenges such as dyslexia.

The company’s videos on its Indiegogo page, along with the backgrounds of the people involved, make me very opened mind, the reason I myself have a Czur on order. Is this a sure thing? No! But I still like the odds. It reflects favorably on Czur Tek that the company—based on what I know—isn’t pushing an iffy product out the door. What a contrast to Barnes & Noble. It released the Nook GlowLight Plus without even telling customers that first version of the software couldn’t deal with ePub library books and those from bookstores other than B&N.

We started this program 3 years ago and spent so much time to test our algorithm. By now, we have made a significant breakthrough on flattening the curve of books automatically. We believe that technology shouldn’t be minority’s privilege, so we have lowered our scanner’s price to a unbelievable level. Now all Czur’s key technology has been accomplished and the mold is ready. As the Czur scanner is small and easy to use, everyone can use it for book scanning….

The following are our estimated timeline for main functions.

However, because February 8th is the Chinese spring new year, we will have around 10 days off for holiday. The factory will have a longer holiday. We are afraid that we cannot continue assembling until the last week of February. So we probably will start delivering by the end of February. However, we will try our best to expedite it.

Please note that the $199 price for individual purchases is only available through Indiegogo. The future retail price will be $399 plus taxes and shipping.

Note: The Indiegogo page mentions an estimated shipping date of January. I trust that it will be updated shortly.