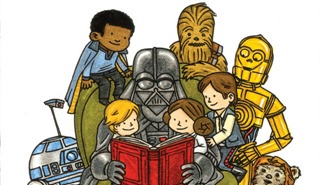 One favorite trick of futuristic science fiction is depicting some vast societal change without ever explaining how that change actually came about. A favorite example is Star Trek and the “death” of print. Almost nobody reads paper books in Star Trek except for antiquarians like Captain Picard.

(Which is really odd, when you think about it. As of the TNG era, they have “replicators” which can materialize random objects such as printed books out of nothingness on request—the ultimate “print on demand” machines for books that can be read without need for power or digital distractions. Paper books should be more available than ever because they can be produced as one-offs and recycled when no longer needed, bringing one of the better elements of e-books—instant availability—to print in a way not currently possible in the real world. Yet nobody reads them?)

But apparently science-fantasy settings can go the other way. As Chris Lough reports on Tor.com, one of the few elements of secondary canon to have survived into the new Star Wars canon seems to be the idea that people don’t read at all in that setting. Lough cites former Tor.com co-writer Ryan Britt’s 2012 article on the matter, recently expanded into the book Luke Skywalker Can’t Read, and quotes from a new Star Wars novel in which Leia Organa wonders at seeing someone still using the ancient lost art of ink-on-paper writing.

Britt notes that the only forms of media seen in Star Wars seem to be audiovisual or oral. When Uncle Owen and Aunt Beru need to reprogram household devices or farming implements, they look for a droid who can “speak” their digital languages. The only times we ever see characters actually reading printed characters are when they pop up on occasional computer screens, like the cockpit display of Luke Skywalker’s fighter plane, and those are more functional than literary.

A lot of the time, basing interpolations about a world strictly on what’s seen on-screen can lead to a skewed perception of the setting, just because some things simply aren’t deemed important enough to represent. For example, one could easily conclude that most television shows and movies depict some more-evolved form of human life that no longer has any need to eliminate waste in restrooms.

But you see printed words or printed matter in almost everything. And on the other hand, Star Wars is supposed to be a completely different setting with no connection whatsoever to our own society, and one easy shorthand for demonstrating that is to make some common element in our world completely unheard of in theirs. In this case, that’s apparently the art of reading and writing.

So, in the Star Wars universe, you apparently wouldn’t be able to read e-books at all—but there would probably be plenty of audiobooks to go around.