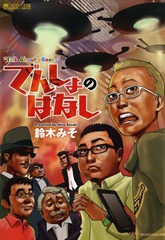 The Japan News has a story looking at the movement of manga toward the digital market. Effectively, Japanese book and magazine sales have been shrinking considerably over the last twenty years, down from 2.6 trillion yen in 1996 to 1.6 trillion in 2014. But manga published in single-issue comic book form have remained steady, even as manga magazines have fallen.

But digital manga has more than taken up the slack. In fact, e-manga has been selling so well that the manga market is about to have its best sales year yet when both paper and digital sales are taken into account. “No such strong growth has yet been observed for e-books,” the article notes, but the article’s author, Kanta Ishida, wonders whether e-manga might eventually make paper manga obsolete.

In a suggestion that is both frustrating and interesting, Ishida suggests checking out this week’s issues of “Densho no Hanashi” (“Talk About eBooks”) and “Nana no Literacy” (“Literacy of Nana”) by manga author Miso Suzuki. In 2013, Suzuki managed to obtain the copyrights to his previously-published manga and started re-issuing them electronically via Amazon’s Kindle Direct. As a result, he is now making 10 million yen per year in profits.

These particular manga are works of journalism, not fiction. Ishida notes they are meticulously researched and deeply analytical, and adds:

Basically, this manga puts emphasis on providing information. But it is also entertaining. I myself am all for and only for paper publishing, but this manga convinced me that we cannot ignore the world of e-publishing any longer if we are serious about the future of manga.

Such a description really makes me wish I could read those particular manga—but even if I could get my hands on them, they would be in Japanese! (If any of our readers have read them, and would care to chime in with a description, I’d be interested to hear it.)

Regardless, I can only hope that digital manga are more successful in Japan than they were in the USA, for the manga artists’ sake.  In 2011, a consortium of 39 Japanese manga publishers launched an e-manga site called JManga, but only a year and a half later the site shut down, taking all its customers’ purchases with it. Of course, there are a lot more manga customers in Japan than in the USA, so they’ll have a lot broader customer base over there.