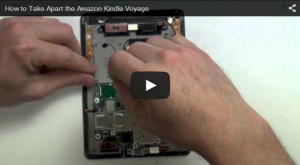 Nathan ran a great write-up on the challenges of rooting the Kindle Voyage, the Paperwhite and other recent Kindles.

He was following up on a how-to video on taking the Voyage apart.

Meanwhile, at MobileRead, buzz persists about hacking the recent-model Kindles.

Remember, Kindles are little linux beasts. Amazon has tried to turn them into corporate creatures. Now the open source community wants Paperwhites and the rest to be free again to run such applications as Cool Reader without hassles for even the knowledgeable.

Among other things, Cool Reader can display ePub, the nonproprietary standard.

Jail-breaking, aka letting you modify the equipment you paid for, isn’t for wimpy, of course. You don’t just need technical expertise. You must also be willing to void your warranty.

If the Kindle hackers succeed big time in their jail-breaking attempts, however, that will benefit even the least adventuresome users. Same for other customization efforts.

Here’s an example showing why. Right now Amazon doesn’t just omit the all-bolding feature. It won’t even let Kindle owners install their own fonts—something possible with earlier Kindles. Hacking unleashes new features that the more control-minded people over at Amazon would rather you not care about.

Yes, this is indeed a control issue. Jeff Bezos’s willingess to be customer centric goes only so far on hardware matters.

I’m hardly shocked that Amazon has devoted so much energy to successfully hack-proofing PWs and the Voyage, but at the very least Jeff and crew should let us use our own fonts, especially if we can’t even get all bold on virgin Kindles.

Look at the bright side, Jeff. Those hackers are good for your shareholders. If a hack catches on, then you know there’s a demand for a certain feature.

Sadly, I suspect that improvements in Android smartphones have reduced interest somewhat in Kindle hacking. Android has annoyances such as user-hostile memory restrictions, but at least plenty of e-reading apps and typographical choices are around.

Contrast that with the closed world of the Kindles. It’s one more reason why dedicated e-reader sales these days are far short of their potential.

Just as a reminder, I’m a huge fan of Amazon hardware in general, not merely the company’s superior customer service. Kindle devices offers good build quality and value in general.

Also, many e-book fans appreciate the fact that Amazon’s DRM is more breakable than it might otherwise be (for legal reasons, we’ll not point to how-tos on that topic).

I think that Amazon recognizes realities here even if it could do much better and more aggressively discourage publishers from insisting on DRMing of e-books. Dropping “protection” from Audible books would help as well. But in general Amazon is less rigid than it is with the devices themselves.

Let’s hope that in the future Amazon’s hardware side will show more respect for end users.