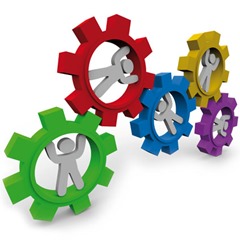 Europe is trying to build a single digital market, especially with respect to educational materials. Publishing Perspectives has a look at the progress of this initiative, particularly concerning the necessity of requiring interoperability between e-book devices and formats, and the availability of open content which can be remixed and reshared.

Germany is one of the first countries to put the new open access requirements of the European Union’s Digital Agenda into practice, passing laws to require free access to educational content. The requirement seems most likely to affect publishers, given how reliant publishers have been on locking down their content with DRM.

Publishers are undoubtedly facing an interesting challenge. Nevertheless, they should have been on the alert since the 2007 publication of the OECD (Organisation for Economic Co-operation and Development) document Giving Knowledge for Free. The Emergence of Open Educational Resources. This document clearly signaled upcoming changes: “In a digital world where educational users increasingly engage with a culture of cut and paste, remix, collaboration and instant Internet access, open content licensing will provide a vitally important facility for sharing and reshaping knowledge in the name of culture, education and innovation. While respecting the basic principle of copyright, open content licensing allows a broader understanding of information management in a way that builds on the existing system. There can be little doubt that open content licensing will become an important option in the copyright management, distribution and utilization of educational resources.”

Some publishers, such as Flat World Knowledge and Unglue.it, are already acting on these principles using Creative Commons licenses. Other publishers are going to need to work out how best to follow suit.

It’s encouraging to see Europe taking the lead in requiring publishers to open access to information for the sake of education. I can’t imagine the publishers will take the matter lying down, however. And I can’t imagine such an initiative going quite as well in the USA.

The strange thing about the article is that it starts out talking about e-book interoperability in general terms, touching on the importance of being able to buy an e-book and then read it on different platforms and in different apps—but then it veers off into discussing educational markets and doesn’t really come back to general e-book-related matters.

Pillar II of the European Digital Agenda sets goals for interoperability—but the article doesn’t say much about how such goals could be enforced. Are they going to require Amazon to make its e-books open in different apps? If so, how could such a thing even be done?