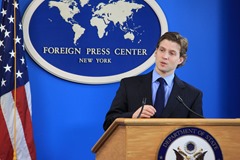 My fellow Democrats love to position themselves as pro-science. But what if they are to certain-e-book-related matters what the Republicans are to climate change—willing to go outside mainstream scientific thought if it suits special interest groups? Or maybe just plain ignorant—or a mix of the two?

In the case that follows, we’re talking about pandering to DRM fanatics and the copyright lobby.

Now, here are some specifics. Earlier this week TeleRead Editor Chris Meadows told you about the bizarre statements attributed to Alec Ross, a former advisor to Hillary Clinton when she was secretary of state. Ross could very well end up as a top White House tech advisor should Ms. Clinton win the next Presidential election. Roger Tagholm, a veteran reporter now writing for Publishing Perspectives, a well-regarded industry publication, vouches for the accuracy of the following Ross quote: “Some of the developments in data compression are extraordinary. We are moving towards a world in which a 400-page book can be compressed to the ‘weight’ of a text message. So, imagine a day when you are reading a Facebook post from a friend who mentions this great book they’ve just read, and imagine being able to click on the title and have it sent to your device or printer. Thanks to Edward Snowden, we’ve learnt the importance of encryption, so the book will be encrypted so it can’t be pirated. I feel very optimistic about these developments.” 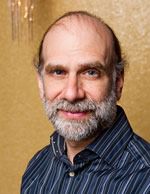 So how valid is Alec Ross’s statement scientifically? I ran it past Bruce Schneier, a globally respected expert on computer security and related matters, who is a fellow at Harvard Law School’s Berkman Center for Internet & Society. “Wow,” Schneier responded via e-mail. “He has no idea what he’s talking about.” Schneier reminds us that even the best data compression just “can’t compress books into tweet-length messages, unless it’s a title and author that you can take to a bookseller.” Really, this is basic CompSci 101 stuff.  Schneier did not say it in that precise language, but I’m confident this is exactly what he meant.

One possibility, of course, is that Ross was talking about direct links to e-book files rather than about compression. If so, however, as Chris has noted, what’s so extraordinary about that? Such an opinion would betray the same level of ignorance.

Then there is the issue of blurring the line between DRM-related encryption and the variety that protected Edward Snowden’s confidential communications with the media. It’s as if Ross is trying to make a case for the DRM-related kind by misleadingly associating it with the kind Snowden used. Yes, encryption has its uses, but Ross reminds me of the pitchmen who decades ago were talking up absurd X-ray-based cures. Forget trifles like the cancer risks. Mindlessly used encryption is a human-created malignancy in the e-book world. If it remains untreated, it will cost e-publishers billion in sales—not to mention the continued hassles for booklovers.

I beg of my fellow Democrats and progressives: Let’s get our house in order. If the Democrats really want to keep defending book-sales-related DRM and stay honest, maybe they should cut to the chase and give this as a reason for their flagrant disregard for science and fact: “Because that’s what top campaign contributors want us to think, do and say.” And maybe consulting or legal clients as well? I have no idea if that’s true in Ross’s case. But it is worth following up on.

I am publisher of TeleRead.com, the world’s oldest Web site devoted to general-interest news and views on e-books. As a lifelong liberal Democrat, I very much approve of your interest in digital divide issues here in the United States and also abroad. Thank you for caring.

That said, I am baffled by your statements on e-book-related encryption and would welcome explanations and clarifications. A veteran reporter with Publishing Perspectives quotes you as saying: “Some of the developments in data compression are extraordinary. We are moving towards a world in which a 400-page book can be compressed to the ‘weight’ of a text message. So, imagine a day when you are reading a Facebook post from a friend who mentions this great book they’ve just read, and imagine being able to click on the title and have it sent to your device or printer. Thanks to Edward Snowden, we’ve learnt the importance of encryption, so the book will be encrypted so it can’t be pirated. I feel very optimistic about these developments.”

I’d very much welcome an email response to the questions raised about your assertions above by Bruce Schneier, who as you may know is a top computer security expert as well as a fellow at the Berkman Center at Harvard.  “Wow,” Schneier told me. “He has no idea what he’s talking about.” Realistically achievable compression ratios just would not allow for such a scenario. And as TeleRead Editor Chris Meadows has pointed out, the same scenario by way of direct linking to the e-book file would not be anything for someone knowledgeable to get excited about.

Assuming you did mean a compression-based scenario, just why would you think it was possible? Do you have any citations you can share with me? Full text if the citation isn’t normally public? By name, just what person or company or government or other organization outlined such a scenario to you if you are saying that the above is achieved through compression? Relevant contact information so I can catch up with your source myself? This is really within the realm of CompSci 101, the reason why Bruce Schneier and Chris (who studied computer science in college) are so skeptical.

I am also curious why encryption of e-books for anti-piracy purposes would have anything to do with the use of it to protect the confidentiality of messages that Edward Snowden exchanged with the media. It’s as if you are seeking to let e-book DRM bask in Mr. Snowden’s halo.

Without meaning any disrespect, may I ask if you are benefiting financially in any way from connections with DRM-related companies, such as developers of anti-piracy software? If so, how much money are we talking about? I am not interested in your income from actual content companies. Rather I mean possible connections with encryption vendors and the like.

Below are relevant Web addresses:

Because you were a key technical advisor to Hillary Clinton while she was Secretary of State, and because you may well end up in a similar role if she wins the presidency, I believe these matters are very much of public interest.