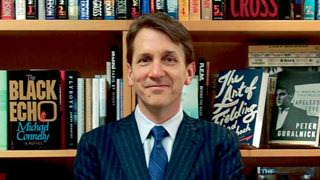 Another day, another rah-rah op-ed from a traditional publisher. Hachette CEO Michael Pietsch has a self-congratulatory piece in the Wall Street Journal patting himself and the other Big Five publishers on the back for how print publishing isn’t endangered after all because e-book sales are declining. (They’re actually only declining for the Big Five publishers who have jacked up the prices on their own e-books, but we’ll let that pass for now.)

Music, movies, and TV have all been dramatically changed by the mobile device revolution, Pietsch explains, because they were suddenly divorced from the need for heavy, non-portable equipment. But books were portable already, and so it’s hard to improve upon something like that.

Oh, and also, self-publishing is great and all, Pietsch acknowledges, but authors like getting paid in advance, and publishers are in the business of investing and taking risks to make that happen for authors, as well as getting more attention for new books via their expertise at promotion.

Pietsch sees a rosy future for the publishing industry—and he even spares a few words to suggest that the future is bright for self-publishing, too, as “appetites unnoticed by mainstream publishers, like the erotica explosion that began in online fan fiction, will find, well, satisfaction.” (Because we all know that’s what self-publishing is really for, isn’t it? Erotica! But no, plenty of other works will also enjoy skirting the publishing gatekeepers as well.)

Ever-larger retailers and wholesalers bring significant margin pressure, which will lead to continued conglomeration. Social media will continue to expand the writer’s ability to connect with readers; publishers will deepen their relationships with writers, but they’ll also create content of their own. As runaway books sell ever-larger numbers, publishers will earn more on their biggest sellers—which will keep driving up the advances they pay for potential hits. At the same time, publishers will need to innovate and challenge assumptions about every aspect of the business.

He closes by predicting that fifty years from now, people will still be writing articles predicting the imminent death of publishing.

All in all, I’m not terribly impressed. Anybody who’s been reading TeleRead for very long could find the holes in Pietsch’s arguments without needing much help from me. I’ve already mentioned the fallacious premise of the e-book sales decline, but there are still plenty more. For example, publishers may be happy to invest and take risks so a few lucky authors can get paid in advance, but what about all the thousands of authors who aren’t that lucky? Not every book in the slushpile is actually terrible, but publishers can’t afford to publish everything that’s good. And there are quite a few midlist authors out there who would scoff at publishers’ claims of promotional expertise.

But really, I don’t feel the need to rebut him point by point. If Pietsch wants to crow, let him crow. All the publisher self-promotion in the world won’t change what’s actually going on in the market—self-published books continue to take off, while publishers continue to cut back. I wouldn’t go so far as to predict The End Of Publishing—the publishers have been around too long to drive themselves out of business altogether—but their conservative outlook is only slowing them down.

As the old saying goes, the proof of the pudding is in the eating. So let’s just let the publishing industry go on about its business and see whether it’s still so optimistic in another decade or so. Meanwhile, I think it’s great that this kind of op-ed is out there as an example of just how out of touch the Big Five publishers really are.