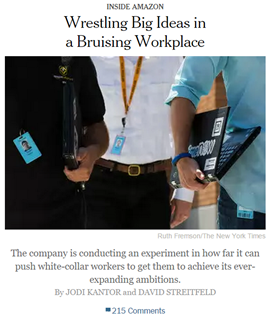 If you believe Jodi Kantor and David Streitfeld of the New York Times, we’re talking about a Darwinian sweatshop where employees compete against each other, Hunger Games style.  Let me add a little context. I don’t know about Jodi Kantor, but in his past writings, Streitfeld has come across at times as a spokesman for the legacy publishing establishment, so often Amazon’s enemy. Perhaps some technophobia and an old-boy network are at work here.

But if you read comments that self-identified Amazon alumni shared with Times readers, Kantor and Streitfeld could in fact be on to something in this case.

“I worked at Amazon for 18 months in the Web Services division a few years ago,”  one ex-employee wrote in. “It was hands down the single more miserable experience of my life (including friends dying and a parent getting cancer). The tenure in my area was nowhere near 1 year, likely closer to 6 months. I worked 7 days a week on a few hours of sleep a night with a 1 year old child at home. It almost ruined my marriage, and I still…wake up to nightmares of that place.”

What’s more, did the Kantor and Streitfeld concoct stories of vicious discrimination against the sick and the pregnant? And did they invent tales of Amazon pushing employees to report each other’s failings to their bosses? Complete with a how-to example? “I felt concerned about his inflexibility and openly complaining about minor tasks”? Or did the Times make up tales of men weeping in their offices after brutal conferences?

Furthermore, doesn’t the Kantor-Streitfeld piece jibe with past articles on Amazon’s brutal warehouse conditions at the time? Remember? Ambulances ready to take away workers overcome by heat exhaustion? How Upton Sinclair could have writen that one up! In some ways could Amazon actually be not just The Hunger Games, but also The Jungle.

Certainly the current feature in the Times fits in with my concerns over the Big Business favoritism that has weakened anti-trust enforcement in recent years. Amazon’s defenders insist that the company earned its place at the head of the e-book pack without breaking any laws. Maybe. But could this not be the problem—the fact that in the United States of today, we’re in dire need of laws and court rulings friendlier to employees, unions, and small businesses? Who knows? Perhaps the negative vibrations from the New York Times coverage can even create a little more leverage for those of us pushing to make the e-book business less Amazon-controlled.

No dogma here. I’m a capitalist and do see a place for large corporations, and I’ll continue to admire Amazon’s better sides and Jeff’s Bezo’s passion for innovation. Ideally, however, the Kantor-Streitfeld article will encourage him to rethink his company’s policies and practices toward “Amabots.”

Long term, what’s ahead? Amazon wants to fill the sky with drones to deliver merchandise. So much for delivery jobs? And those oh-so-helpful Amazon customer service reps on the phone—could they eventually be replaced with a mix of sophisticated AI and advanced voice recognition? Might AI even kill off some jobs of Ph.D.’s working for Jeff in R&D. Not to mention the jobs of thousands of white-collar Amabots writing nasty memos against each other? More jobs gone. Will all this be the real end to the Hunger Games said to exist at Amazon? Next to no humans left to play them?

The Obama angle: The President has lauded Amazon as a jobs creator. If the Times and certain other news organizations are right, however, might the real issue be, “What kinds of jobs? And what kinds of treatment of the people in them?”