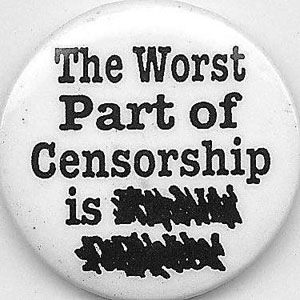 Remember that story I posted a few days back about the Orwell estate taking down 1984-branded merchandise from Café Press? Mike Masnick at Techdirt has done a little more investigating and found there’s a lot more to the story than other sources had reported.

It turns out that the Orwell estate takedown wasn’t even aimed at the particular T-shirts that got taken down. It was aimed at other merchandise on Café Press, which used photos of Orwell and quotes, in an effort to look like actual licensed merchandise.

The thing is, the takedown wasn’t even properly formatted to be a valid DMCA takedown notice. A valid takedown notice requires specific identification of the exact item or items that are infringing. The Orwell estate’s notice didn’t have that.

Café Press should have replied that they needed a properly-formatted notice to be able to take down the items being complained about. Instead, they responded by taking down everything on the site that looked like it might have something to do with Orwell or 1984, including those T-shirts that weren’t even named in the original takedown notice.

It’s easy to understand why they might want to do that. I’ve tangled with lawyers with takedown or cease-and-desist notices a few times myself, and given that I’m not made out of money, the simplest thing to do was simply knuckle under and do whatever I could to get the lawyers’ crosshairs pointed away from me. Still, when you’re running a presumably-well-funded print-on-demand merchandise company like that, you might be expected to show a little more backbone.

It puts me in mind of the time similar POD merch company Zazzle pulled down a Tolkien-referential button entirely on its own initiative, without even getting a request from the Tolkien estate. Techdirt notes that this isn’t the first time Café Press has done something like this, either. Hopefully a little public shaming will prompt them to be a bit more careful in the future.