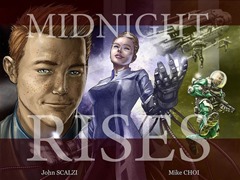 Interactive book apps may not yet have set the world on fire, but there is at least one place for them—as an adjunct to video games. On January 28, 2015, Industrial Toys LLC released Midnight Rises, an interactive graphic novel application for iOS. The e-comic serves as a prelude to Midnight Star, a mobile shooter game which Industrial Toys LLC released for iOS today. (Both applications are expected to come to Android “sometime soon.”)

Midnight Rises was written by John Scalzi, with art by Mike Choi and music by Serj Tankian. The first chapter is free; the next two are 99 cents each via in-app purchases. (One reader reported the second chapter was free in exchange for a Facebook share.) Additional cover art is also available for $1.99. The comic is interactive, with pan effects on panels and branching plotlines for the reader to explore. It tells the story of human contact with aliens, and a science ship, the Joplin, dispatched to investigate an anomaly and ending up stranded far from home.

Perhaps the most interesting aspect of the interactivity is that the comic app also interacts with the Midnight Star game—your choices in the choose-your-own-adventure story affect the way the game plays out. Scalzi explains:

This is one of those “capabilities of the mobile platform” things — In the story we’ve put places for you to explore and to make choices for Charlie Campbell. If you play Midnight Star, the game will talk to the graphic novel, see the choices and explorations you’ve made, and tweak things in the game to reflect those choices. There’s no downside to any exploration — you’re not penalized for one choice or another, including the choice to simply read through the story. It just means that when you play the game, it’s personalized for you. Which is kind of cool, and again, something that reflects that both the graphic novel and the game are built for the mobile experience, not just on phones and tablets.

He adds that both graphic novel and game can be enjoyed independently of one another, with no requirement to have one to use the other. The game is free to play with in-app purchases, though Scalzi promises the game can be played without them. (I have more to say about the game in an article for our sister publication GamerTell.)

Since neither app is yet available for Android, I cannot yet try them out for myself. However, they seem to be getting some good reviews—and since they’re written by Scalzi, they should at the very least have an engaging story with memorable characters. If you’ve tried one or the other for yourself, let me know what you think.