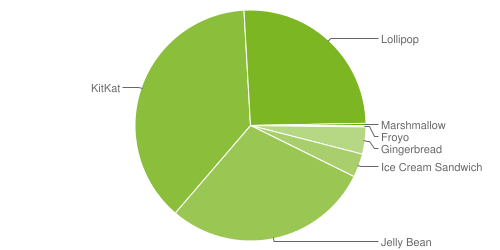 The latest figures on the Android Developers Dashboards suggest that Google is fast outdistancing past jibes that its Android ecosystem is too fragmented. Data on devices connecting via the Google Play Store in the week ending November 2nd shows that 37.8 percent of users are now running the KitKat version of Android, while a further 25.6 percent are using Android 5.x Lollipop. Android 6 Marshmallow, meanwhile, is just starting to creep onto the radar, with 0.3 percent of users so far.

With a further 29 percent of users running various versions of Jelly Bean on their systems, the Android ecosystem now only has 4 percent of devices running OS versions prior to Android 4.x. That huge majority of users with the later OS versions implies that Android simply doesn’t have a legacy maintenance problem any more. Compare Microsoft, which as of spring 2015 still had to maintain a user base of some 250 million for Windows XP. One advantage of the shorter life cycles of mobile products, as well as their easier upgrades, I guess. No wonder Microsoft decided on a free upgrade policy for Windows 10.