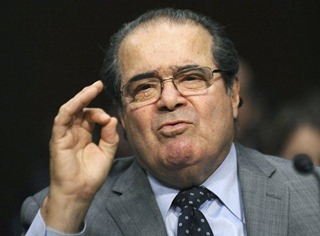 The late Justice Antonin Scalia’s life was replete with irony. Though one of the court’s most conservative Justices, as a strict constructionist he often ended up siding with the advocates of intellectual property reform in copyright-related cases. He was good friends with one liberal judge, Ginsburg, and actually asked Obama to appoint another liberal judge, Kagan, who he knew would be able to give him good arguments. (He later took her hunting with him, regularly.)

And, despite owning an iPad himself, Scalia once wrote an opinion that seems tailor-made to favor Apple’s chief adversary in the e-book trade.

While looking over Truth on the Market, whose blog symposium on the Apple antitrust affair I’ve covered twice so far, I ran onto another post by Heritage Foundation Senior Legal Fellow Alden Abbott. I had written on Abbot’s support for Apple’s side in my first symposium roundup—he felt the court erred in not considering the added costs and inefficiencies a wrong decision could impose on future innovators. In this post he took a closer look at one of the precedents he cited there. The funny thing—and another Scalia-related irony—is that it seems to me this case actually does a lot more to favor Amazon than Apple.

The case in question is is Verizon v. Trinko, a 2004 decision involving Verizon’s relations with a competing local phone company. The Telecommunications Act of 1996 had required incumbent local exchange carriers like Verizon to play nice with competing local exchange carrier startups, like Trinko. The letter of the FCC regulations would have required Verizon to sell network access below its own costs, and one of those competing startups, Trinko, filed suit contending that Verizon was discriminating against it in how it filled other LECs’ orders versus its own.

The part of the decision Abbott cited in his pro-Apple symposium post was the part where Scalia wrote that highly technical and complex fields such as the telecommunications industry made it extremely difficult for courts to render good decisions—especially considering that the complex nature of the legislation and regulations surrounding them made it likely that many such decisions would be required. Since false positives could be costly and harm innovation, Scalia felt it was a good idea to avoid placing that burden on the courts. It’s easy to see how Abbott could go from that citation to recommending the courts should keep their grubby mitts off Apple. Abbott also quotes Scalia explaining that the Telecommunications Act of 1996 didn’t extend antitrust laws beyond the standards that already existed.

But the far more relevant and interesting portion from my point of view is where Scalia says (with case citations omitted):

Firms may acquire monopoly power by establishing an infrastructure that renders them uniquely suited to serve their customers.  Compelling such firms to share the source of their advantage is in some tension with the underlying purpose of antitrust law, since it may lessen the incentive for the monopolist, the rival, or both to invest in those economically beneficial facilities.  Enforced sharing also requires antitrust courts to act as central planners, identifying the proper price, quantity, and other terms of dealing–a role for which they are ill-suited.  Moreover, compelling negotiation between competitors may facilitate the supreme evil of antitrust: collusion.  Thus, as a general matter, the Sherman Act “does not restrict the long recognized right of [a] trader or manufacturer engaged in an entirely private business, freely to exercise his own independent discretion as to parties with whom he will deal.”

David Balto quoted another portion of this same decision in his post in favor of Apple:

The mere possession of monopoly power, and the concomitant charging of monopoly prices, is not only not unlawful; it is an important element of the free-market system. The opportunity to charge monopoly prices–at least for a short period–is what attracts “business acumen” in the first place; it induces risk taking that produces innovation and economic growth. To safeguard the incentive to innovate, the possession of monopoly power will not be found unlawful unless it is accompanied by an element of anticompetitive conduct.

As a result, Scalia largely “eviscerated the doctrine that monopolists may be required to grant third party access to a facility deemed ‘essential,’” insofar as phone companies were concerned. But that’s not the part that interests me.

The really fascinating part is that Justice Antonin Scalia, the court’s most conservative constructionist, wrote the opinion that most effectively counters all the “monopoly” charges of the publishers, the Authors Guild, Authors United, New America, and Amazon’s other critics. Monopolies aren’t bad if they weren’t arrived at illegally, and companies that put in the effort to build the infrastructure are entitled to reap the fruits of their labor.

It’s hard to imagine a clearer example of a company becoming a monopoly on the strength of its infrastructure than Amazon building an e-book market by selling its Kindles to everyone in sight, and hence effectively rendering them unlikely to buy e-books from anybody else. Now I regret more than ever that I’ll never have the opportunity to read an opinion Scalia might have written in the Apple case.

Scalia wrote that a company who, like Amazon, “[acquired] monopoly power by establishing an infrastructure that renders [it] uniquely suited to serve [its] customers” can be a good thing, and such a monopoly can encourage “risk-taking that produces innovation and economic growth.” It is hard for me to imagine that he would have seen a competitor fomenting an illegal conspiracy to try to quash that power as the kind of “risk-taking” he meant.