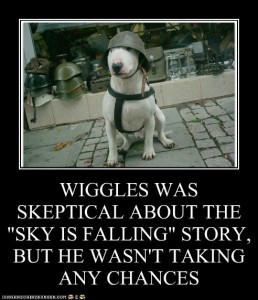 All weekend I saw this New York Times story making the rounds of various blogs. Basically, the point of the article was that Amazon is (once again) being a terrible company by raising prices.

Well, if you read further, they aren’t actually being accused of raising prices but of reducing the discounts. Which, yes, does mean the same thing to the consumer, but which has a different connotation nonetheless.

Digital Book World was particularly strident in their coverage of this story. Here’s their quote:

“The moment many have feared in the book publishing industry may be finally here, according to the New York Times: Amazon, having established control of a large portion of the book market in the U.S., is raising its prices.”

All right. Calm down everyone. Let’s take a few quotes from the article and take a closer look. Here’s my favorite line:

“It is difficult to comprehensively track the movement of prices on Amazon, so the evidence is anecdotal and fragmentary.”

Yep. The sky is falling. How do we know it? Because some people say it’s true. Therefore, it must be true.

“Mr. Hollock’s first book had decent sales when it appeared in 2011, but now that it is losing momentum, Amazon raised the price.”

That sure sounds like implied cause and effect to me. However, reading further in the article:

“Mr. Hollock says he has called Amazon several times to ask why the price of his book was going up, and never received an answer that made sense.”

So we don’t actually know that Amazon is raising the price because of lack of momentum, do we?

Let’s close with one more quote, which I think more accurately reflects the true problem:

“[Hollock’s] award-winning book, published by Kent State University Press, had a steep list price of $35 to begin with. In the author’s view, Amazon is simply compounding the trouble by raising its price to more than $30 from $23.”

So it’s now Amazon’s job to fix publisher pricing issues with bigger discounts? Sounds to me like the real problem here is the publisher’s pricing. If the book isn’t moving at a $35 list price, maybe … lower the list price?

Move along. Not much worth seeing here.