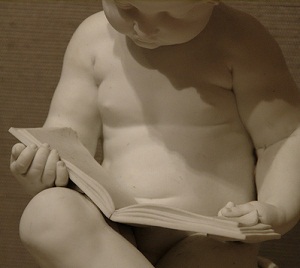 Digital Book World’s Jeremy Greenfield reported yesterday about a new digital reading survey from The Joan Ganz Cooney Center, which looks at how parents and kids read together on digital devices. The survey of almost 500 iPad owners found that 27 percent of them did not read on their iPads at all with their children, and of those who did, most placed limitations on how and when they did so. From a recap of a Digital Reader post:

“The single most common reason for not co-reading with the iPad was the obvious one; 60% of these 127 parents have a preference for paper, while a third found that it was awkward to do so and nearly as many were concerned about adding to the kids’ screen time (27%) or that the kid might want to co-opt the iPad away from the parent (30%).”

I must admit that, even as the gadget lover I am, I can relate to some of these findings. I don’t have an inherent bias toward paper for myself, but for very young children, I do think it is the better medium. I have no problems at all using e-book readers or tablet devices for children who have hit the chapter book stage, but for beginning readers, they are unsuitable for several reasons.

For instance, pre-reading children benefit from having a physical object to manipulate. Many books for babies are made of cloth or thick board so that babies will not unduly damage them if they put them in their mouths. Books for older babies often have pages with cutaways or raised areas or bits of fabric and texture for the baby to touch. It’s just not the same animal as an adult book with just words in it. You can replicate the pixels, but you can’t replicate the tactile stimulation.

For early readers, it’s common for children to follow along with their finger as they read. This can be problematic on a touchscreen device. I’ve seen it! Every time they touch something, the page moves and they lose their spot. A specially designed app that doesn’t turn the page unless they press on an arrow or other signifier might mitigate the issue. But you can’t load your own content into such apps, and for the time being, with technology being as delicate and expensive as it is, they require supervision. So while I would not categorically rule them out as a principle, they would have to be only a part of the reading program, not the entirety of it.

But the survey does point out some pros of e-reading with kids. Many parents surveyed cited the audio narration options of children’s book apps as a plus, even if they only used it some of the time. And others talked about the ease of traveling with e-books instead of paper.

I think that e-books, for me, are like any other technology—it’s not that they’re inherently good or bad, it’s how you use them. There are some great educational videos out there for children, but you would never plop them down in front of a television all day and call it school. Children, moreso than adults, need different stimuli, different mediums, different experiences.

Once they’re past the baby stage—during which nearly everything goes into their mouths—a multimedia e-book can be part of their reading curriculum. But paper books, which have a tactile element, which they can read independently without supervision, and which are cheap and freely available, can be part of that program too. It doesn’t have to be an either/or proposition. 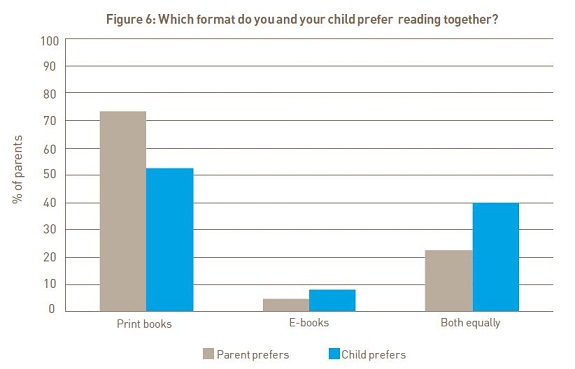 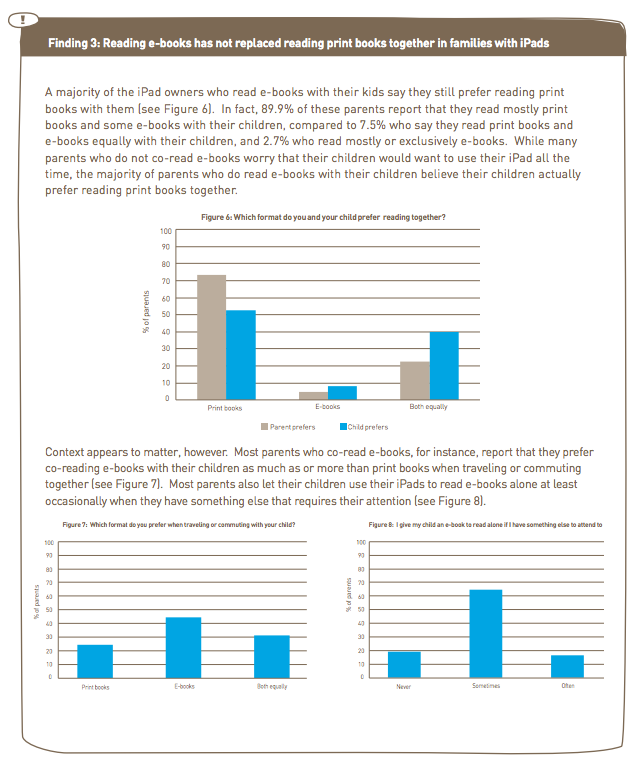 Why do indie authors want Hachette to lower prices? The answer is obvious

Are Amazon editors really that independent?

Publishers go off deep end, pay consultant to tell them what they want to hear

Been there, read that, passed on the t-shirt: The ebook pricing false comparison