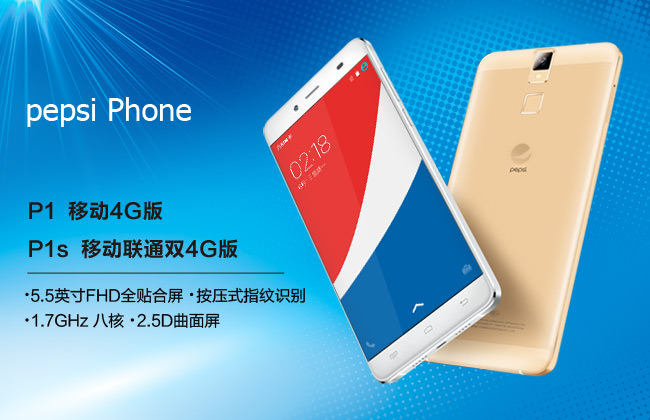 The Pepsi Phone P1s is now officially happening in China. After numerous leaks, first appearing as far back as October, fonearena has picked up full details, from Weibo Chinese reports and JD Finance. The phone, manufactured by Shenzhen Scooby Communication Equipment Co., is actually a pretty sweet device. It has a 5.5-inch 1080 x 1920 pixels Full HD screen, a 1.7 GHz Octa-core MediaTek MT6592 CPU, 4G, 2GB of RAM and 16GB internal memory, and a microSD expansion slot. The Pepsi branding seems mostly confined to the screen graphics and a little logo on the back, but the manufacturer is essentially licensing the Pepsi brand. And the phone’s close resemblance to an iPhone 6s Plus won’t surprise anyone used to China’s me-tooist approach to product design.

The Pepsi Phone also illustrates some of Android’s problems in China, though. The OS is the dido OS 6.1, fork based on Android 5.1 Lollipop but without the full suite of Google goodies, including the Google Play Store. Pepsi may benefit from the brand association, but the manufacturer will probably benefit more, in an ultra-competitive, cut-throat, and chaotic China smartphone environment where Google’s direct revenue options are limited at best – certainly not through app sales. The Chinese internet as a whole, though, is hugely skewed towards mobile, meaning that the smartphone market is a key battleground for all major tech and internet players.

Pepsi may get nothing but win out of this exercise, though. The Pepsi Phone is being crowdfunded – meaning that Pepsi is essentially getting the public to fund its marketing campaign. The crowdfunding campaign on JD targets to hit $469,495 by December 3, and already looks over one third of the way there. The first tier of opportunities, at around $78, is already sold out, according to fonearena, the c.$110 tier of 1000 devices total is still open. Seems like a great way to get your customers to pay for your advertising – and maybe a lesson for other gadget crowdfunding campaigns everywhere. With all the noise about its potential Play Store re-entry into China, I suspect Google isn’t complaining either.