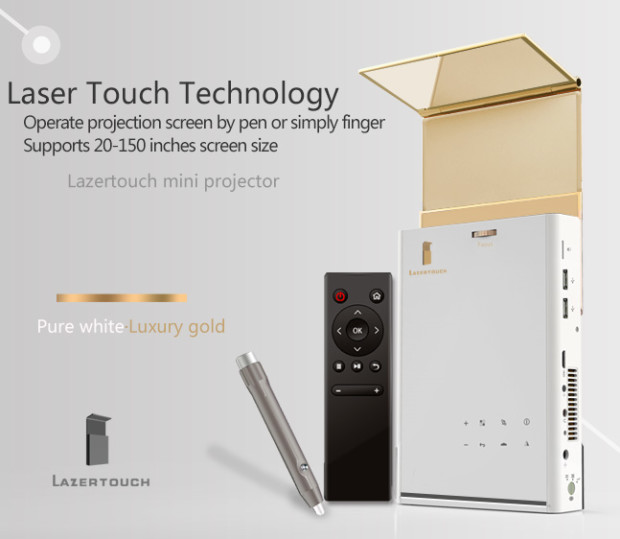 A Chinese company has launched an Indiiegogo project that could provide the perfect solution for teachers wanting to use Android for classroom presentations – or anyone who wants an interactive wallscreen on any wall for their e-reading pleasure. The Lazertouch Mini Projector promises “a tablet-sized 20-inch to gigantic 150-inch display onto any wall or surface to create a virtual touchscreen and interactive white board for meetings, presentations, 3D movies, immersive gaming, VR, and more.”

With a claimed 7 patents to its name, Lazertouch “emits an invisible laser beam parallel to the projection screen,” according to the launch release. “When a finger or stylus touches the laser beam, the sensor detects and interprets the touch.” The same release states that the Lazertouch comes with Android OS (Android 4.4), “downloadable apps, speakers, 32GB of storage, Bluetooth, Wi-Fi, a 13,600mAh rechargeable battery, and ports for HDMI, USB, headphones and Micro SD. Lazertouch comes with an IR e-pen stylus, remote control, and pointer.”

It’s easy enough to imagine classroom applications for the Lazertouch, or solutions for the visually or physically challenged. The out-of-date version of Android is a little disconcerting, but hopefully by the time the final unit ships, it’ll have a more up-to-date edition of the OS, or at least a clear upgrade path. Super early bird backers get a $475 price tag against what looks like a final retail price of $559, all plus shipping, with debut slated for July 2016.

Bear in mind that this project is far more than just a crazy kid in a garage. The Chinese company backing it, Easitech, is serious enough about it to actually put out a separate press release, citing the Lazertouch as “available through Indiegogo.”  Whether that gives you potential backers out there any more comfort, I’m not sure, but with the project already almost $8000 towards its $30,000 goal from only 17 backers at the time of writing, and a month left, I reckon this Indiegogo project does stand a chance of happening.