Alexia Tsotsis has a post at TechCrunch pointing out that the phone call is “dead” (in the sense in which the term is used in the tech industry these days—meaning “on the decline”). The article itself is interesting enough, though it says much the same things as a piece I covered here already. But it seems to me that the “decline” or, perhaps, transmutation of the mobile industry might have some implications for “telereading”, too.

E-books are just one aspect of telereading, after all. Other aspects include magazines, newspapers, blogs, and other textual Internet sources—and getting those in a timely fashion requires mobile data access, such as many cell phone plans provide. But at the moment that data access comes bundled with a requirement to buy hundreds of minutes of voice calling, which many smartphone users may never even dent.

The reason that the phone call is “dead”, Tsotsis says, is that people just don’t make phone calls anymore. She uses a TechCrunch inter-office rivalry as an example: Mike Arrington teases MG Siegler that his iPhone can’t make calls due to AT&T’s network problems.

MG’s response to Mike, “It doesn’t need to. I use the phone mostly for apps and browsing, not calls.” On background: MG is in his 20s and Mike is around 40. As if we needed more proof, MobileCrunch editor Greg Kumparak’s AT&T usage data is indicative of the voice habits of an entire generation.

Kumparak’s usage chart shows only 3 of 450 Anytime Minutes, 2 of 5,000 Night & Weekend minutes, and 0 of 2754 Rollover Minutes used. And s Tsotsis points out, people now have a lot better methods of voice communication (e.g. Skype, Google Voice, FaceTime) than the plain old telephone when they do want to communicate.

And then there’s the way that calls on the old telephone system tend to come at the most inconvenient possible times.

Although I am perhaps closer to Michael Arrington’s generation than MG’s, my phone habits seem to be more in keeping with the younger generation. I hardly make any phone calls at all anymore, and this is why I cut ties with AT&T several months ago to go to a pay-as-you-go solution that will give me the convenience of a cell phone when I need to make a call, but not make me pay through the nose for it.

Even people who do use cell phones just for voice are finding available phone plans don’t fit their needs. Just today, I broke my parents free of the AT&T tether. My father made only about 100 minutes’ worth of cell phone calls last month, for which it’s ridiculous to pay $50. Even if unused minutes roll over, if he doesn’t get close to the maximum number of minutes in a month there’s no way he’s ever going to use rollover minutes. $100 for 1,100 TracFone minutes and a year of service is much more economical.

This is also why I doubt I will ever have an iPhone while the mobile companies continue to tie data and voice together. Why would I want to pay so much per month for a phone when I hardly even talk on it? (I’d love to get a pay-as-you-go iPhone, even if it cost several hundred dollars more than the contract-subsidized ones. They have them in the UK and such places, but not in the USA.) 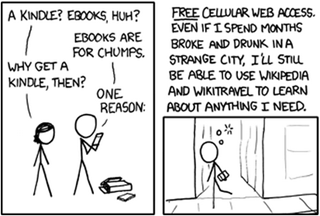 But meanwhile, e-book readers such as the Kindle have been coming in with a different model—a data-only 3G connection, and what’s more one that is completely free. Granted, this freedom is mostly because the types of data it can carry use a tiny amount of bandwidth compared to the multimedia audio and video content that rule the Internet these days—but most of what people do with the mobile Internet now is Facebook and Twitter, and those don’t take any more bandwidth than web browsing or e-books. For that matter, cell phone text messaging does not either—but still the cell phone companies charge ridiculous sums for sending or receiving text messages from their phones.

And driving these ridiculous plans are smartphones—as Tsotsis says, “things we call ‘phones’ but to us they’re just pocket-sized computers.” Smartphone users pay for these plans because they’re the most convenient way to get mobile web access. But as people (especially in the younger generation) realize they’re not even using half of what they’re paying for, perhaps they’ll start looking for alternatives.

Why pay $90 per month for two years for an iPhone plan when you could pay $40 per month for a contract-free Virgin Mobile MiFi unlimited data plan that you could use with your iPod Touch, iPad, e-book reader, laptop, your friend’s laptop, etc.? There’d be plenty of cash left over to buy a cheap TracFone for when you did need to make or take voice calls at times when VOIP isn’t convenient.

I hope that this will lead to more flexibility in plans from phone and Internet companies—letting people have unlimited data but pay per minute for voice in return for a lower overall plan rate, for example. And if cell companies can give low-bandwidth e-book readers unlimited data for free, why can’t they give smartphone and tablet users some minimal level of data service, enough for doing text but not multimedia, for free? And as for ISPs, what about bundling some kind of wireless Internet service with landline connectivity?

But I suppose I shouldn’t hold my breath waiting for this to happen. It took decades for phone service to go from Bell monopolies to the ubiquitous inexpensive unlimited long-distance plans it offers today. Cellular voice and data still has some distance to go to reach that level, and it may take just as long.