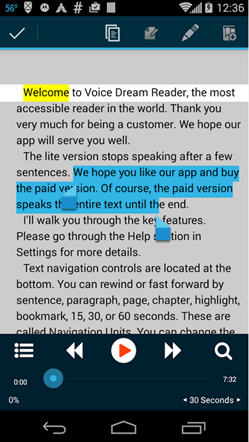 I’m a fan of Moon+ Reader Pro for text and read-aloud.

But if you own an Android phone or tablet and really want to do text to speech in style, then spend $10 on Voice Dream Reader for Android 4.4 and up—just brought over from iOS.

Moon+ offers more text display options. Voice Dream controls TTS more precisely and conveniently. That’s true whether you want to move to the next paragraph or wander around in the text, then return to where the voice was reading.

I have discussed Voice Dream’s iOS version in depth on the LibraryCity site. In the wake of preliminary tryouts on a Samsung Galaxy Tab S and LG LGL41C cell phone, I believe that the Android port is more or less the same stellar app even though some major features are missing for the moment.

Mind you, Voice Dream is not perfect. Voice Dream crashed, for example, on the Samsung. (But I haven’t the slightest doubt that a fix will be on the way if others experience the same issue.) Also, the Google Play Store says Voice Dream is incompatible with my Huawei Mate 2 phone. Drat. Apparently the operating system isn’t current enough—I need to update. Finally, if there’s a basic word lookup, I can’t seem to find it. A pronunciation dictionary is supposed to be coming.

A blessing for people with disabilities

Voice Dream LLC’s head, Winston Chen, has considered people with sight issues, dyslexia and other disabilities to be a major market, and the Braille support will be on the way for the Android version. Winston has already blended the Android app in with the Bookshare service.

Every school system in the U.S. and many other countries should be exploring Voice Dream, even for students without disabilities. Listening to a part of a first chapter might be just the ticket to help a reluctant reader get into a book.

For commuters and exercisers, too

Voice Dream is also for people who commute. Or perhaps like me, they want to listen to books while out on a walk, then enjoy the text version at home.

Without doubt Voice Dream lack’s Moon’s richness of font selections and other text-related customization (even though it offers its own kind options for readers with attention deficit problems).

But I can live with this. Especially helpful for me is the choice of the Sans Serif Medium front. It’s bold enough for me. I need a decent amount of perceived contrast between text and background. Callously, Amazon has refused to offer sufficiently bold text for the millions of readers up against the same problem.

On top of everything else, Voice Dream lets me export highlights and notes and even email them.

Adding to the app’s appeal, Winston promises “a native ePub/HTML reader supporting images.” For now, Voice Dream  can read “PDF, Plain text, and HTML files.” It offers “Text extraction from DRM-free ePub and DAISY books” as well as the ability to handle “DAISY audiobooks, and audiobooks as zipped MP3 files.”

Sadly, Voice Dream cannot display DRMed books. What a powerful argument for plain old ePub and against locked-up books or those in proprietary formats that this app can’t handle!

The fault isn’t Winston’s. My guess is that he would do Adobe DRM and Kindle DRM in a flash if the companies allowed him. Perhaps he’ll have an easier time with the digitally watermarked books that might be on the way eventually from major publishers.

In case you’re curious, yes, Voice Dream for Android works with a wide variety of voices. Right now I don’t know if Voice Dream picked up my existing purchase for Moon+ Reader Pro or whether I paid for it, but “Peter,” the human-sounding U.K. baritone from Acapella, was a cinch to install.

No financial relationship with Voice Dream or its developer

I’ll get on with the Voice Dream feature list and other details, but first, given my high praise for the app, let me explain what’s going on. I simply love Voice Dream as a user. Also, I can appreciate its benefits to people with disabilities, as well as its potential for K-12 in general. I paid the $10 and haven’t the slightest financial relationship with Winston even though we are “friends” on social media (at least as far as I know).

For now, I am actually on Winston’s S list. In terms of the marketing, I hated an audio e-mail app he released for use on the road. Even TTS e-mail requires more concentration and interaction than does listening to the car radio or to an audio book. Use of the app by blind people is different. More power to Winston in that respect. But, no, audio e-mail on the road will never get my blessing. Winston and I will just have to agree to disagree on that one,

That said, I’ll not let his present hostility toward me bias my reviews of Voice Dream. It was at the top of its class when I wrote about the iOS version, and at least based on a quick tour, the Android version seems the same way.

Voice Reading
– Listen to documents like it’s music, with play-pause button, gestures or remote control
– Continues reading when you lock the screen
– Change voice and reading speed (50-700 words per minute) on the fly
– Remembers the voice and speech rate used for each document

Important Notes: – It is not possible to load DRM-protected books from iBooks, Kindle and Nook. – Word level highlighting is not supported for builtin voices

The first version of Voice Dream Reader provides the core text-to-speech and reader functionality. We will extend this in forthcoming releases to bring its capabilities in to line with that of the iOS version, including the addition of:
* Braille support
* Ivona and Neospeech voices
* Pocket support, including save webpage
* Pronunciation dictionary
* Sleep timer
* Cloud sync to retain reading position across multiple devices
We also plan to add a native ePub/HTML reader supporting images