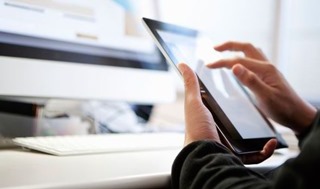 The latest projections from the Gartner Group predict computer and mobile device sales to slow even further in 2016. But what does this mean for e-books and e-readers?

End-user sales are expected to rise just 1.9% over 2015, while the actual amount of money spent on devices is expected to decline for the first time since Gartner began tracking device sales in 2010. Gartner projects the total value of the gadget market at $667 billion, down half a percent from 2015.

The statistics show the market for expensive “ultramobile” PC products more than doubling from 2015 to 2018, while mobile phones see slow but steady growth, basic tablets hold more or less steady, and traditional desktop and notebook PC sales decline considerably. The decline in value while sales rise slightly is attributed to the rise of the sub-$50 tablet market, such as Amazon’s 7” Fire. Smartphone sales are moving away from premium devices and toward more basic handsets, due at least in part to emerging markets such as China.

The projection doesn’t say anything about e-books directly, but we can infer. As nearly as I can tell, e-ink readers aren’t even tracked on this particular study, though stats-aggregator Statista projects them falling from 7.8 million units to 7.1 in 2016. Their sales peaked in 2011 at 23.2 million units and has been declining ever since. Those numbers aren’t very impressive alongside the device figures projected in the Gartner report. Mobile phones are expected to sell 1,959 million units in 2016, and basic tablets 195 million. There are a lot more potential e-reading devices right there.

When the popular e-reading era began, in the ‘90s, it grew out of portable devices people originally bought for other uses, then found they enjoyed using for reading—the Palm PDAs and their imitators. The iPhone and iPod Touch became available right as the Palms petered out—more multi-use devices. And while the e-ink Kindles certainly drew more people into the e-reading fold, it’s unquestionable that a lot of people now read on tablets and phones more often. And more of those devices selling means more chances for people to start reading. It might also give a boost to e-reading in the emerging markets where more device sales are expected to happen, such as China, Russia, Brazil, and India.

I don’t think the slowing growth has any implications that e-book growth will also slow. Quite the opposite. It seems to me the biggest thing the figures show is that outside those emerging markets, the gadget market is effectively mature. By now, tablets and smartphones have gotten cheap enough that just about anybody who wants one has got one. I think the most interesting thing about that is not implications for the future, but implications for right now: we’ve become a mobile-device-equipped culture. (As should be fairly obvious already, simply from the number of people you now see with them everywhere.)

In the more mature markets, just about anyone who would want to e-read has the means by which to do so within their power. As such, there’s not as much of a need to try to sell the devices to them—people have the devices. The important part is to figure out how to get them using them for reading, in addition to all the other stuff they do. In a way, we’ve got the best market for e-books right now we’ve ever had, because so many more people than before could read them if they wanted to. The trick is figuring out how to get them reading.