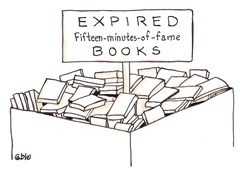 In some cases this can prove controversial—the New Yorker piece discusses one librarian who lost his job after protests over the weeding of 40,000 books from the Berkeley, California public library. But usually it’s necessary in order to keep the library useful.

(This is an area where many Little Free Libraries fall down, by the way—sometimes you’ll find them stuffed with the most useless junk no one would ever want. One of the valuable aspects of projects like Indianapolis’s Public Collection art installations is that they’re curated by librarians.)

Weeded titles can can include hopelessly-outdated works on topics of current interest, such as resume guides that advised listing height, weight, and marital status, or some of the more sublimely ridiculous works turned up by the librarians who host the Awful Library Books blog. (Warning: some of the book covers can be NSFW, as is one that’s featured there as I’m writing this. But by and large, you’re more likely to draw attention at work by laughing yourself silly.) There really is no need to keep books like The Psychic Sasquatch and their UFO Connection (a free read in Kindle Unlimited!) or Be Bold with Bananas in your library when the shelf space could be more usefully apportioned.

Some of the books [Awful Library Books bloggers librarians Mary Kelly and Holly Hibner] highlight seem so bizarre as to be worth keeping. Shouldn’t everyone have a chance to flip through “The Psychic Sasquatch and Their UFO Connection”? But public libraries aren’t designed to preserve unusual texts, they said. “There are places where you want to hang on to the weird stuff of our culture. That’s in museums and archives,” Kelly told me. “Keeping a bunch of crap on a dusty shelf is not preserving anything,” Hibner added.

But as intriguing (and sometimes uproarious) as the process of weeding physical books can be, it brought to mind the question of what kind of “weeding” might be necessary for e-book collections. After all, e-books don’t take up any extra shelf space, which means a library’s collection need only be limited by the books available from the e-book vendor.

The way that most major publishers’ e-books work, libraries either pay a small amount for a limited number of checkouts, or a large amount to keep the book perpetually. Any e-book that’s already been bought is effectively a sunk cost, and doesn’t cost the library anything to keep around in case someone does want it. So any “weeding” that might be done from that perspective would be a decision simply not to buy another license for a limited-use e-book after it’s used up, because it’s not worth spending the money from the library’s limited budget to buy it again. And for third-party services such as Hoopla Digital, the library doesn’t even have to worry about that at all—the service itself does the curating, and libraries only pay for what their patrons use.

From a point of view of serving the community by having as much relevant information available as possible, e-books seem ideal. What does it matter if a library has an e-book nobody ever checks out? It’s not keeping them from getting all the new ones their patrons ask for.

There is one circumstance where weeding e-book collections might be required, but that doesn’t involve libraries but subscription services. When it actually costs a business extra money to have voracious readers, they tend to want to get rid of as many popular titles as they can so as to stay within their budget. We’ve covered Scribd deciding to get rid of romance and erotica titles, audiobook titles, and finally dropping “unlimited” service altogether in favor of limited monthly checkouts. That’s exactly the opposite of the way libraries are supposed to work. Meanwhile, services like Kindle Unlimited that divide a set amount up among all e-book checkouts are vulnerable to being abused with e-books full of thousands of pages of junk and a link to the last page.

And this is why there’s always going to be a need for libraries, whether or not subscription services continue to thrive. Libraries might have to keep their print collections sharply focused, but they don’t have to limit what e-books they carry—and they’ll be happier the more patrons use them.

Meanwhile, if you’re looking for often-weeded-out titles like God, the Rod, and Your Child’s Bod, might I suggest trying Amazon? As a retailer who doesn’t have to worry about shelf space, the odds are pretty good they’ll have it, whatever it is.