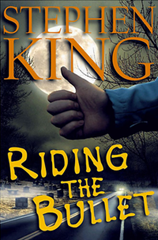 An article in the Digital Reader about the 4th anniversary of the Nook e-books store prompted me to look back to the turn of the millennium. It was a period in the history of e-books that I don’t think most us think about as much. It was a couple of years after the founding of Peanut Press, so people had time to get used to the idea of e-reading—and big stores like Amazon and Barnes & Noble were starting to get interested for the first time. And that’s what led to a very brief e-book bubble.

In March 2000, Stephen King decided to test the e-waters with a novella, “Riding the Bullet.” Distributed for free on some sites (including Amazon, Barnes & Noble, and Chapters), sold for $2.50 on others, it was downloaded over 400,000 times in the first 24 hours of its availability, causing server meltdowns as the companies’ hardware was quite unable to keep up with the demand. “PDF eBooks are Here to Stay,” trumpeted Karl De Abrew, Debenu CEO, in a blog post headline in July of that year.

And so the major stores like Amazon and Barnes & Noble started getting into e-books, mostly in PDF or Microsoft Reader format. We don’t tend to remember those primitive times today—when we think about Amazon or Barnes & Noble and e-books, we think about the Kindle and the Nook. That’s because by 2002 or so, it turned out that people weren’t crazy about e-books after all—they had just been crazy about Stephen King.

In an article from the June 10, 2002 issue of Newsweek, cited in this TeleRead post but no longer available online (I had to dig it out of my local library’s EBSCOhost MasterFILE Premier), Anna Kuchment writes

E-books? Most of us haven’t given them a second thought since Stephen King’s digitally published “Riding the Bullet” was supposed to relegate paperbacks to the status of stone tablets. That was back in March 2000. After 400,000 fans ordered the novella in a single day, publishers like Time Warner and Random House raced to set up e-publishing divisions of their own, and analysts churned out rosy sales predictions. But King’s book was a one-time wonder. Today an e-book is considered a hit if it sells just 2 percent of that total. “We had this blip where people got really excited [about e-books],” says Kate Tentler, publisher of Simon & Schuster Online. “Now people are back in reality.”

Later in the piece, she quotes Forrester Research analyst Steven Yonish saying, a bit prophetically, “Something needs to happen on the supply side that will give consumers a fresh look at the industry. They need a reason to change their lifestyle.” Something like the Kindle and $9.99 e-books, perhaps?

And, of course, it turned out that even when people were crazy about Stephen King, they weren’t always crazy enough. When he tried to do a crowd-funded project, The Plant, the payments he received fell below the (rather unrealistic) required threshold within just a few chapters. So he called it a failure after only making $463,832 from it. (Too bad Kickstarter wasn’t around back then.)

So, as Nate Hoffelder writes, Barnes & Noble got out of e-books in 2003. (“We all believe there is a future for e-books,” [Vice President/General Manager of Barnes & Noble.com Daniel] Blackman said. “It’s just not here yet.”) It would be six more years before it dipped its toe back in the water.

But Amazon sold PDF and MS Reader files from 2001 through 2006, and experimented with a short story market, a sort of forerunner to its self-publishing and “Kindle Singles” programs, from 2005 through 2010. And all the while, it was looking into other ways to develop e-books, such as by buying Mobipocket and inventing the Kindle. So while B&N was content to shrug and give up, Amazon kept getting back on a succession of horses of different colors until it found the right pony to bet—and win—a fortune on.

I mentioned in an earlier post that Amazon is the frontrunner in the e-book market due to a deadly combination of business savvy, e-commerce expertise earned through nineteen years of operation, a willingness to operate on razor-thin margins and put off profit for another day, and a focus on world-class customer service. But it’s also important not to understate its experience in the e-book market. From 2000 all the way up to when it introduced the Kindle, Amazon was experimenting with selling e-books, gathering data on what worked even a little bit and what didn’t. The end result was that the Kindle was able to hit the ground running and stand on the shoulders of the failed efforts that came before it. (I am mixing my metaphors tonight, aren’t I?)

And that’s why Amazon is such an e-book monster—it’s stayed focused a lot longer than the competition. Barnes & Noble dabbled in e-books but didn’t stick with it. Apple was content to let app developers do the heavy lifting (since, as Steve Jobs said, “People don’t read anymore”) until the iPad came along, and then the only way it felt it could enter the market was to get the publishers together to pull a fast one on Amazon. (And even then, the iBooks store completely failed to take off the way Apple had confidently predicted it would. The inability to read iBooks books on anything but an iDevice might have had something to do with that.)

Sony all but invented e-ink readers with the Librié, but didn’t really seem able to promote it because it lacked the magic bullet of a popular content store. (And really, if Sony’s known for anything, it’s for managing to survive on the strength of one or two popular innovations across lean years until it makes the next one, but very rarely having more than one big hit at once.) Kobo seemed to do all right in a small way, and is still popular in areas where Amazon isn’t, but it fades like an LCD tablet screen in the sun anywhere Amazon is in the market. But in Amazon, we got the lethal combination of business acumen, e-commerce expertise, e-book experience, media sales, and money that made the Kindle.

And that’s why Amazon’s on top: it didn’t get discouraged when the first bubble popped.