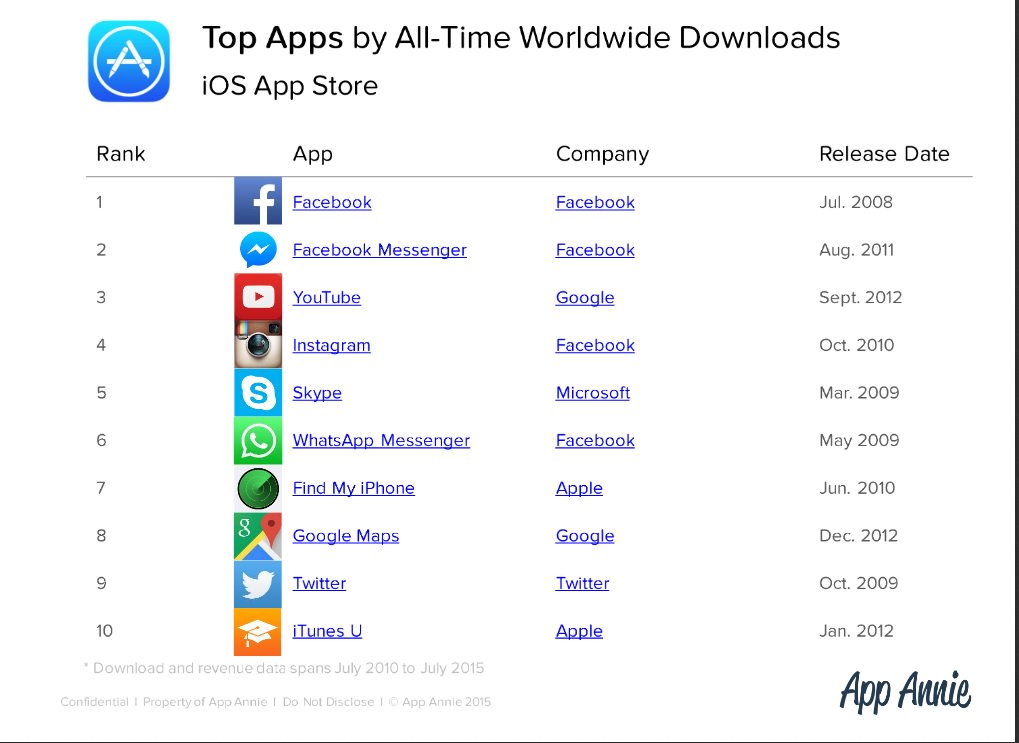 App Annie, which bills itself as “the standard in app analytics and app market data,” has recently shared what it states are “The Most Popular iPhone and iPad Apps of All Time.” Sadly, there isn’t an ereader app among them. However, there are other interesting trends – including what looks like a big preference for writing on iPads.

App Annie’s presentation explains that “we calculated iOS’s top-downloaded and top-grossing apps (split by games and apps excluding games) since we activated our trackers in 2010. We also examined recent usage data to gauge which of these apps are still widely used today.”

The only interesting Games trend to note for the typical TeleRead reader is that “Words With Friends” comes in at #10 in the list of most downloaded games of all time, and is in the Top Ten of most-used games in mid-2015, in both the UK and the US. iPhone and iPad users are word fans, it seems.

In the most-downloaded Apps of all time, though, it’s the social media giants that score big, with Facebook, Facebook Messenger, YouTube, Instagram and Skype as the Top Five, in that order. (And note, by the way, how well Apple’s competitors are doing out of this.) However, #10 on the list is iTunes U, which suggests that iOS devices are scoring big as teaching and learning aids.

Also, #4 app in the Top Ten rankings for apps by all-time global revenue is Pages, Apple’s own word processor for iPhones and iPads. So clearly the whole world – or at least the Apple-using part of it – wants to write on their iOS devices – even at $9.99 a time.

There’s much more information in the App Annie presentation, for those inclined to download it. Meanwhile, those are the key takeaways for a TeleRead audience in my view. And no, it’s not enough to cure my Android fanboydom. But it certainly points up some interesting mobile device trends.