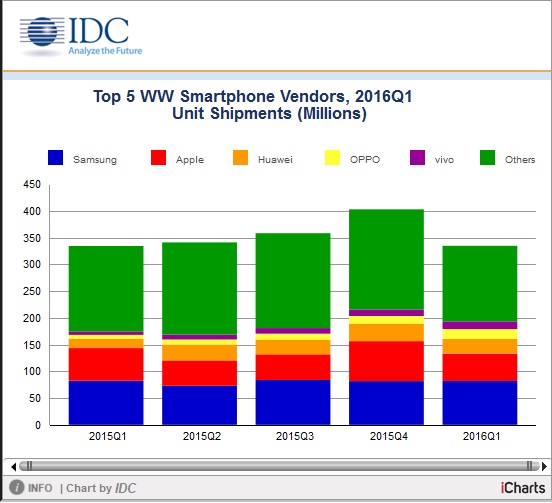 So, aside from the impact on Apple and iBooks already covered, what difference will all this make for ebooks and e-reading? I doubt the China-focused trend that IDC highlights, with “the addition of lesser-known Chinese brands,” really is going to shift ebook reading options that much. IDC does highlight “the reintroduction of a microSD card slot” as a major factor in the success of Samsung’s S7, which may persuade Samsung and other manufacturers to readopt external storage for ebooks and other content in future devices. Also, “within emerging markets, Samsung has performed well with its more affordable J-series as it looks to capture both budget conscious consumers and first-time buyers,” which could encourage smartphone makers to bring better devices to the budget end as competition increases within a static overall market.

One trend I might expect, although IDC’s own data and analysis provides nothing to substantiate it, is that device manufacturers may look at ever newer, more differentiated formats to rekindle (no pun intended) demand and set their offerings apart from the generic smartphones that are no longer riding growth in market size. More phablets? The smartphone equivalent of Amazon’s Kindle Oasis, with highly differentiated form factors to open up new customer audiences? Foldout screens and other radical redesigns? Manufacturers obviously need to do something to bring us back to the sales counters, and maybe new tech and new formats will be their solution. Could be interesting if so.