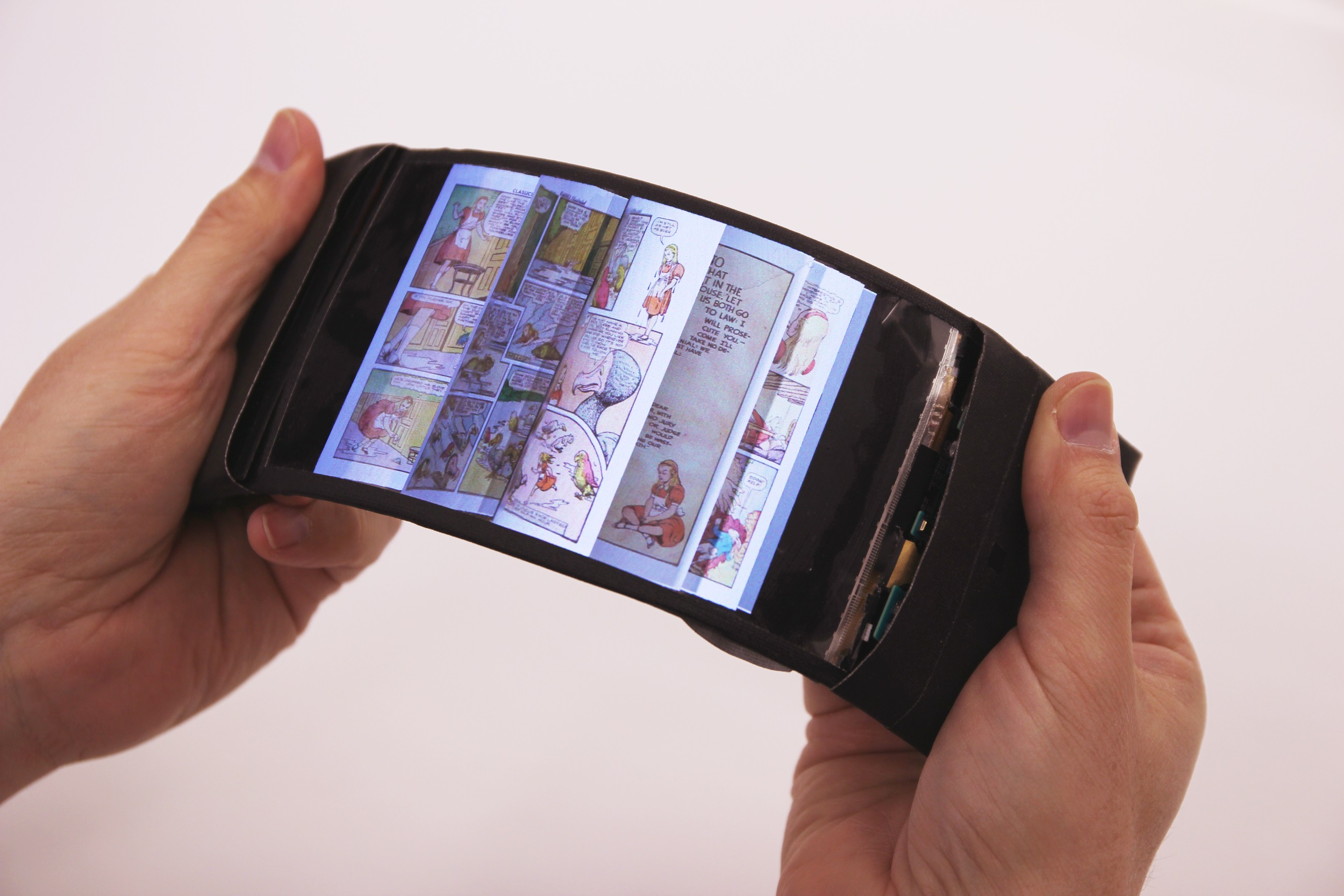 The new ReFlex flexible smartphone, developed by researchers at Queen’s University’s Human Media Lab in Canada, claims to be not only the world’s first fully functional bendyphone. Its creators also have adapted the technology to create a new e-reading experience.

“When this smartphone is bent down on the right, pages flip through the fingers from right to left, just like they would in a book,” says Roel Vertegaal (School of Computing), director of the Human Media Lab at Queen’s University, in the announcement. “More extreme bends speed up the page flips. Users can feel the sensation of the page moving through their fingertips via a detailed vibration of the phone. This allows eyes-free navigation, making it easier for users to keep track of where they are in a document.”

If this works out in practice, the ReFlex certainly could be a pointer to other developments in mobile device technology and interactive e-reading. You can see from the above description why this implementation could enable a far more book-like interaction with your e-reading device than current screen technology.

But is the ReFlex for real, or vaporware? Well, the announcement states that “Queen’s researchers will unveil the ReFlex prototype at the tenth anniversary Conference on Tangible Embedded and Embodied Interaction (TEI) conference in Eindhoven, The Netherlands on February 17th.” So at least a working prototype exists, which presumably is close to the device illustrated above. As to how soon it can go into production, the announcement predicts that “bendable, flexible smartphones will be in the hands of consumers within five years.”

The ReFlex’s specs are not exactly dazzling, but acceptable for such revolutionary technology. “ReFlex is based on a high definition 720p LG Display Flexible OLED touch screen powered by an Android 4.4 ‘KitKat’ board mounted to the side of the display,” notes the announcement. “Bend sensors behind the display sense the force with which a user bends the screen, which is made available to apps for use as input.”

As it happens, flexible displays have been around for at least four years. Flexible batteries and powered paper also offer the possibility of taking the whole bendy format forward. LG is now exhibiting high-quality rollable displays. So perhaps it’s about time we saw some real devices truly taking advantage of them. Perhaps with the ReFlex, the time has finally arrived when you can have an e-reader that you can bend like an old paperback.