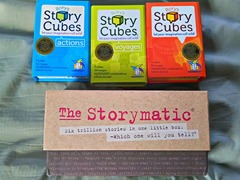 On the Internet, it can be a thin line between reading and writing, especially if you take part in one of the many shared writing universes that float around. But sometimes people who want to write need sources of inspiration. That’s where writing workshopping tools come in.

I already reviewed a book discussing how to use tarot cards for workshopping writing ideas, and that’s a fine thing as far as it goes. But tarot cards’ greatest strength—their rich depth of symbolism—can also be a weakness for writers new to tarot, since they might well spend more time puzzling over card meanings than actually writing. But there are also some reasonably-priced workshopping tools on Amazon that are much more straightforward.

The first tool I examined is The Storymatic Classic ($30). This consists of a box of two decks totaling 540 cards. The gold deck has character types in it, and the orange deck has objects and situations. The rulebook that comes with the deck suggests writers draw two gold cards to combine to get a protagonist, and two orange to inspire the plot, then write a story around them. 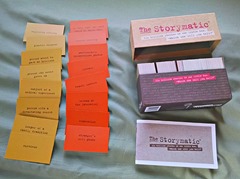 The examples at left might lead to a plastic surgeon who never gives up getting involved with a beauty contest at a library, or a neglected sibling who keeps a family tradition wishing he could take back what he said over a stranger’s cell phone. The possibilities are endless—and any time you hit a wall, you can draw more cards and see what they suggest.

The rulebook includes a number of suggestions for how to use The Storymatic as a party or travel game, or even as a way to seed scenes for improv actors. It also suggests two rules writers should follow in the stories they craft from these cards: the protagonist has to change in some way from the beginning to the end (which is, after all, one of the basic rules of drama), and the protagonist can’t die (since it’s too easy just to kill him off if you don’t know what else to do).

Given that The Storymatic was created by an experienced writing instructor, it has some pretty sound advice, and could prove a very useful tool. If nothing else, it’s fun just to pull random cards out and see what kind of weird combinations you end up with. The only problem is that, with so many cards, shuffling could be awkward. I rather wish there were a mobile app version—though, then again, I’m sure there are plenty of similar mobile apps out there already for generating story ideas. Perhaps sometime I’ll look at some of them.

The Storymatic also comes in “Colonial Williamsburg” and “Kids” versions, which seem as though they could be useful in education. For more information, see The Storymatic’s web site. 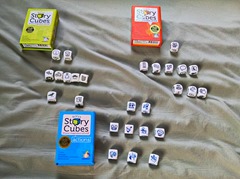 The other tool is a set of dice—or actually, three related sets of dice—called Rory’s Story Cubes. The available sets are Story Cubes, Story Cubes: Voyages, and Story Cubes: Actions. Depending on the seller, they cost from $7 to $9 per set.

Fundamentally, they’re all very similar: each has nine six-sided cubes with different pictographs on each face. The idea is to roll the dice and make up a story incorporating the items symbolized by the pictographs. They come in a sturdy box, made of the same material as textbook covers, with a plastic tray to hold the dice in place when not in use, which doubles as a rolling place for the dice during travel. It closes with magnets built into the flap.

The boxes include suggestions for ways to use the dice, individually or with others. And there are certainly plenty of symbols to be had, especially if you mix and match dice from different sets. The problem I run into is a similar problem to those some might have with tarot cards—the meanings of the pictographs can be rather vague or even obscure (what is that “L” in a box supposed to mean?), and unlike with tarot, there’s no helpful book to look up suggestions.

Of course, when you get right down to it, there technically is no “wrong” meaning for any of the pictures; it’s just what kind of story they inspire in you. Still, for someone who wants more concrete suggestions, The Storymatic might be the better way to go. That being said, these might make great tools for playing with kids who might not be so strong at reading yet, and would be more easily portable than a deck of hundreds of cards.

There seem to be other story-generation dice sets on Amazon; this one, for example. I might look at them later, but it seems likely they’d have the same sorts of pros and cons as Story Cubes.

There seem to be plenty of ways to workshop writing ideas—card decks, dice, online idea generators. Nothing says you have to use any one of them, or only one of them. They might be most fun used in combination: once The Storymatic sets you up with a firefighter who plays the piano, who has a box of hair but no time to regret, you can cast tarot cards to find out what sort of person he is, and roll Story Cubes to see where events take him (and the box of hair).

As for me, I’m starting to realize that maybe finding inspiration about what to write doesn’t need to be a major obstacle after all. Maybe one of these days I’ll write something for publication.