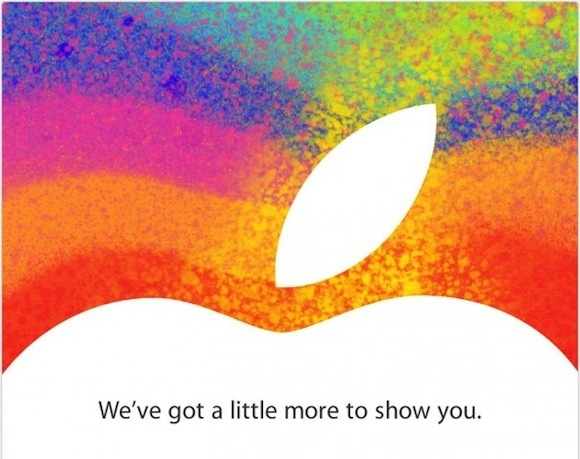 Apple has called reporters together for a conference on October 23, with the vague-but-suggestive line, “We’ve got a little more to show you.” Like all Apple’s announcements, the invitation to this event does not directly reveal the product(s) to be unveiled, but does contain a subtle hint: “little.” This event will likely be familiar to anyone who was around for the unveiling of the iPod nano back in 2005, and will be characterized by three key trends: Apple’s push away from hard disk drives to flash storage, Retina displays, and a move to miniaturization. Various rumors have been kicking around in the weeks leading up to the event, but here are some of the most popular, along with their relative probability.

iPad Mini + iBooks Author: This is really the (mini) star of the show. With the success of 7 inch tablets like the Kindle Fire and Google Nexus 7, it is obvious that these tablets can succeed. A more robust iPad Mini with a tougher frame and better Gorilla glass, stunning-as-usual Retina display, and an update to iBooks Author (something like announcing new publishing partners, new high profile school deployments, etc.), could really signal a return to Apple’s strong partnership with the education market.
Probability: Very high

iTunes 10.8: This one is virtually guaranteed, as its arrival was already announced during the iPhone 5 launch. Furthering the demotion of the PC to merely a component of iCloud, rather than a digital hub, this new version of iTunes will hopefully sharpen the app’s focus on acting as a digital jukebox, rather than as a catchall for syncing, purchasing, playback, and management.
Probability: Very high

Refreshed iPad: Although it would be nice, there is little incentive for Apple to switch the iPad in mid-production, though rumors of a plethora of new iPad-related SKUs in various retail systems might point to its release. Those new models could be just iPad Minis, though; multiply the various carriers by size (GB) by color choices and you have lots of models. Perhaps this mid-cycle upgrade is the reason Apple did not christen this year’s model officially iPad 3, as it knew the model would be short lived?
Probability: Highly unlikely. Look for these next March/April.

13″ Retina MacBook Pro: The introduction of the 15″ Retina MacBook Pro added a vital element to Apple’s laptop strategy. That machine pushed boundaries already broken by the MacBook Air, with its all-flash architecture and disdain for legacy ports, and converting the entire MacBook lineup to this vision is a given. What is less certain is whether the event warrants time dedicated to laptops, or if this will be delivered via a stealth update to the Apple Store. Also, given the cutting edge nature of the laptop-sized Retina display, it may not yet be available in sufficient quantities for Apple to expand the MacBook Pro lineup.
Probability: Somewhat likely, but not announced at the event.

iMac Refresh: The iMac has been relatively unchanged since we went from the lampshade-model to today’s floating all-in-one screen design, and coming up due for an update, since the last was in May 2011. The iMac is still relatively thick, so a move to slimmer 2.5″ laptop-sized hard drives could shave off a few millimeters (most laptop drives are 1/2 to 1/3 the size of their larger desktop cousins). The move to flash memory is highly unlikely, as the iMac provides plenty of space to put a conventional HDD/SDD, unless there is a wildly new design that requires odd-sized storage. 21″/27″ Retina displays might also be a stretch, as Apple is rumored to have supply challenges with the existing 15″ and rumored 13″ Retina panels for MacBook Pros Updates to USB 3.0 and, obviously, processor/memory capacity could round out the package.
Probability: Somewhat unlikely, but announced at the event if it does happen.

Mac Mini Refresh: The Mac Mini occupies a number of odd slots for Apple. It is a departure from the graceful all-in-one aesthetic Apple loves for consumer products, and it garners no love from IT departments who laugh it away as Apple’s low-end server product. Although the space savings would be slim, a flash memory option for the Mini could make it even smaller, though the performance gains might not be worth the cost. Updates to include USB and some additional processor speed would be the only gains. Probability: Somewhat unlikely; definitely not announced on stage. Stealth upgrade if at all.

Obviously we will have to wait and see what Tim Cook unveils at the event today, but all the rumors (and a bit of previous experience) point to an evolutionary march towards the iPod nano/MacBook Air future. With all-flash storage and incredibly-shrinking components no longer the sole domain of wealthy early adopters, it is possible to imagine many of Apple’s products getting smaller, faster and more durable. Retina displays, unfortunately, are still pricey, so while they may be components of smaller devices like an iPad Mini, they’re unlikely to be produced in larger sizes until their cost drops.