In a 48 page opinion judge Chin has rejected the settlement.  Here is the summary from page 1 of the actual opinion:

Before the Court is plaintiffs’ motion pursuant ,toRule 23 of the Federal Rules of Civil Procedure for final approval of the proposed settlement of this class action on the terms set forth in the Amended Settlement Agreement (the “ASAH). The question presented is whether the ASA is fair, adequate, and reasonable. I conclude that it is not. While the digitization of books and the creation of a universal digital library would benefit many, the ASA would simply go too far. It would permit this class action – – which was brought against defendant Google Inc. (“GoogleI1)to challenge its scanning of books and display of “snippets” for on-line searching – – to implement a forward-looking business arrangement that would grant Google significant rights to exploit entire books, without permission of the copyright owners. Indeed, the ASA would give Google a significant advantage over competitors, rewarding it for engaging in wholesale copying of copyrighted works without permission, while releasing claims well beyond those presented in the case.

Accordingly, and for the reasons more fully discussed below, the motion for final approval of the ASA is denied. The accompanying motion for attorneys’ fees and costs is denied, without prejudice.

You can find the full opinion here http://1.usa.gov/elvHew Thanks to BookNet Canada for the link.

The court, in it’s conclusion said that the settlement might work if it were changed from an “opt out” to an “opt in” settlement.  It denied the motion for approval without prejudice, meaning that it will reconsider the settlement if the parties can renegotiate a revised agreement.

He based his decision on the following bases, all taken together:

The establishment of a mechanism for exploiting unclaimed books is a matter more suited for Congress than this Court and would release claims well beyond those contemplated by the pleadings. page 24

That the class of plaintiffs have not adequately represented the interests of certain class members. page 28

That the settlement infringes on the Congress’ power to address copyright issues.  page 30

That the opt-out provisions would grant Google the ability to expropriate the rights of copyribght owners who have not agreed to transfer those rights. page 31

That there are anti-trust concerns, in that the settlement would give Google a de facto monopoly over unclaimed works.  page 36

That other nations object to the settlement, contending that it would violate international principles and treaties is yet another reason why the matter is best left to Congress.  page 45

Some things you should know about Amazon 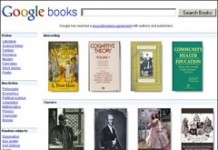 Google Books did not fail; it succeeded