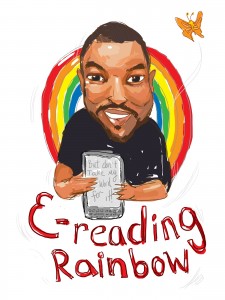 The Reading Rainbow Kickstarter has reached about $3.5 million, and the velocity of increase has slowed considerably. I still think it has the potential to make 10 if it does well over the course of the month, especially when it gets the end-of-Kickstarter boost. But even if it makes its $5 million stretch goal, that will be something.

LeVar Burton has been interviewed by Think Progress, and he took the opportunity to dispel a few rumors about why the show was canceled, and discuss how the show originally got started and how the money from the Kickstarter will be used. Burton explains:

So number one, Reading Rainbow was not cancelled because it was not effective. Reading Rainbow was the most used television resource in our nation’s classroom. In 2009, it was [cancelled] due to No Child Left Behind. That government policy made a choice between teaching the rudiments of reading and fostering a love of reading. So the idea that I am trying to somehow revive a failed endeavor is bullshit. That’s right. I said it. Bullshit.

He notes that the funding will be used to make the Reading Rainbow application truly universal; right now it’s only available for the iPad and Kindle Fire (we had previously written it was available for “select Android devices” or Android in general, but that turned out to be incorrect), but he wants to expand that to platforms such as Android devices, smartphones, and game consoles, not to mention the world wide web. He also wants to make it available for free use in 7,500 classrooms. (They haven’t yet worked out the criteria by which those classrooms will be chosen, however.)

Burton admits to surprise at how well it turned out. He’d chosen to go for 35 days instead of 30 just in case it needed that extra bit of time, and then it hit the goal in less than half a day.

It’s nice to see the Kickstarter doing so well. No matter how it turns out, it’s already successful, and it’s going to do a lot of good in getting kids interested in reading again.