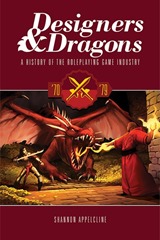 I’ve finished reading through the first volume of the RPG history from that Kickstarter I mentioned the other day, and I have to say that I’m very impressed. In fact, I plan on nominating it for the “Best Related Work” Hugo when the 2014 Hugo nominations come around. It’s just that good.

As I explained in the last article, this history is split across four volumes, divided by decade. However, the decade only refers to the period in which the company was founded. The approach the book takes is to trace the history of each company from start to finish in a separate article, with inserts and sidebars where necessary, and then cross-reference other articles where those histories cross paths. It concludes with a list of “10 Things You Might Not Know About Roleplaying in the ‘70s” that sums up the historical elements common to all the companies in that era that it profiled.

Thus, the history of TSR begins in the ‘70s when it was founded, and follows it all the way up through the ‘90s when it was bought by Wizards of the Coast. A very few companies, like Chaosium, have managed to survive all the way to the present day; most went out of business or were acquired by other companies along the way.

The book is impeccably researched and highly detailed, and author Shannon Appelcline has a knack for turning the history of each company and its people into a compelling narrative. Sometimes it may not be entirely neutral, but Appelcline does point out places where his own history in the game industry might have influenced the telling. (He received a takedown letter for non-D&D-related material during TSR’s litigious phase in the 1990s, and worked at Chaosium.)

You find out a number of interesting things along the way. I wasn’t aware that Larry DiTillio, who worked on He-Man, Babylon Five, and Transformers: Beast Wars, had been involved in the early RPG industry, or that Raymond E. Feist’s expansive series of Riftwar novels was based on an early campaign world for Dungeons & Dragons.

It’s also interesting to note that the inefficient system of bookstore returns that even now contributes to high prices of printed trade novels (and, hence, helps drive traditional publishing’s vendetta against e-books in general and Amazon in particular) was in large part responsible for sinking TSR in the ‘90s:

It was the book trade, however, that was the final straw. Random House had been fronting TSR loans against book sales for some time. Meanwhile, TSR’s book sales had sunk over the years. They were seeing less and less actual cash from the book trade because more money was going to pay off their unpaid loans. Trying to get ahead of this debt was the main factor behind TSR making a big push into the book trade in 1996. This push included sending massive reorders of Dragon Dice into book stores and increasing hardcover publication from 2 books a year to 12.

Both of these expansions flopped, and because bookstore sales are ultimately returnable, TSR was the one left holding the bag. As 1996 ended Random House informed TSR that they’d be returning about a third of TSR’s products — several million dollars’ worth.

And TSR wasn’t the only company to run afoul of bookstore returns in the ‘90s; they helped to sink Traveller publisher GDW as well.

The e-book of the first (1970s) volume is currently available to anyone who pledges at least $1 to the Kickstarter. Future volumes will be made available as they’re completed to people who pledge at least $15; the second volume, covering the 1980s, should be available any day now. (As a Robotech fan, I’m particularly looking forward to the histories of Palladium and FASA.) 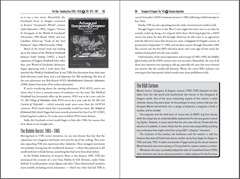 The e-book is formatted in PDF, EPUB, and MOBI versions. The PDF is as impeccable a print book as we’ve come to expect from Evil Hat’s games, formatted in a legible font with sidebars, insets, and epigrams that are appropriately differentiated from the surrounding text. In the EPUB and Kindle versions, those sections are simply presented in-line, which can sometimes interrupt the continuity of the main body text—but there’s not really any other good way to do it, given the limitations inherent in those e-book formats.

All formats of the e-book also include greyscale pictures of lots of RPG product covers. While nice to see, they do make the e-book files fairly large while not necessarily adding all that much to the text. They can readily be stripped out with Calibre if you need to save space on your device.

I did notice a number of typos in the EPUB in my read-through. Most of them had to do with words being improperly italicized or missing spaces before or after text emphasis; I suspect they’re probably formatting glitches from the e-book conversion. Hopefully they can be fixed in the final version.

Anyway, $15 for four volumes totaling at least half a million words of history on all the major and most of the minor movers in the industry is a real steal, especially when you consider what trade publishers charge for their e-books. And if you kick in now, you can help the Kickstarter meet stretch goals and make the books even better. It’s taken in just over $51,300 so far; who knows where it will get by the time it finishes?

I highly recommend these books to anyone even slightly interested in the history of the role-playing game industry and hobby. I’ve only gotten to read the first one so far, but I can already tell it’s going to be an invaluable resource. 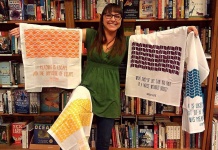 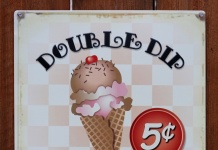