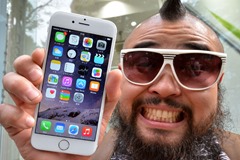 Sales of iPads plunged by an astonishing 25% over Christmas, the company revealed in Tuesday’s quarterly earnings announcement. Holiday sales of iPads were down to their lowest levels in five years. Not since 2011, when the product was still relatively new, have they been so low.

Arends lays the blame for the iPad’s faltering performance at the feet of its only-slightly-smaller cousin, the “phablet”-sized iPhone 6s and 6s plus. Customers seem to be turning away from the iPad in favor of a phablet. It puzzles him, given that the iPhones cost so much for seemingly so little, but then he admits to not having an iPhone of any kind himself, though he does have an iPad mini and an Apple TV.

Arends thinks that phablets like the iPhone are “the worst of all possible worlds: too big for a phone and too small for a computer.” But by the same token, they’re also large enough to be almost as useful as a tablet, while still being small enough to carry in your pocket.

We already knew people like reading e-books on smartphones despite the tiny size of the screen, simply because they have smartphones with them all the time. E-book fans who might complain about not being able to fit much text on a smartphone’s tiny screen would have less cause to gripe about a phablet; my own Nexus 6’s screen holds only slightly less text than a full-sized Kindle Paperwhite and presumably a six-inch iPhone could do just as well. And given that it offers 1440p resolution—33% better resolution than the full-sized 1080p desktop display on which I’m writing this!—holding it up close to my face to read offers no kind of eyestrain problem at all.

Speaking as a recent phablet owner myself, I’ve suddenly found myself lugging around my gadget bag a lot less, because I just don’t need the Nexus 7 at my disposal anymore. A screen that’s only slightly smaller fits in my pocket, so almost all the things that once made me go for the 7” tablet in my bag can be readily accomplished with the 6” phone on my person. Reading e-books, keeping up with my RSS feed, playing Android games…about the only thing I can’t do as well is write at length, because I can’t fit a full-sized Bluetooth keyboard in my pocket. But the Swype keyboard works surprisingly well for most minor writing tasks. I can readily believe the same could be true for iPad owners and their iPhone 6.

Not everyone will be happy with a screen that size. Some people, including a number of my friends, find phablets just too big to be useful as phones. (It’s not a problem I have, but then I don’t use my phone as a phone all that much.) But more and more people are getting phablets. Even if only half of all smartphone users decide they can live with phablets, that means that half of them are going to be less likely to want a tablet, too, which means iPad sales decline.

They’re effectively portable devices that harness the full power of a desktop PC, so can be used for all the same business purposes as a PC—something that no cheap tablet or phablet could hope to match. (My brother did just get a smartphone that runs Windows 10 and can be used as a desktop if hooked to a monitor and keyboard—but since it needs that monitor and keyboard for the full PC experience, it remains to be seen how good a replacement that can really be.) So it’s not surprising their sales would go up—they’re not replacing light-use devices like tablets; they’re replacing heavy-use (and heavy and bulky) laptops.

As for the inexpensive tablets, that can be explained by the same cause that drove total device revenue down while keeping total sales numbers steady—people are buying a lot of really cheap tablets, like the Fire, simply because they are so cheap. I don’t think they’re seeing them as direct iPad substitutes though. Someone who’s already sunk a lot of cash into a phablet that meets most of his device needs might not think it’s worth spending several hundred bucks more on an iPad that would do most of the same things they already have a phablet for—but they could see spending $50 on a Fire that could do a few of the same things.

They might also see the Fire as a substitute for an e-ink Kindle, with the side benefit that it can play media and surf the net in addition to reading e-books. For all that e-ink advocates complain that LCD gives them eyestrain or headaches, it seems the average consumer isn’t quite so attached—which is probably the major reason e-ink reader sales have fallen off so precipitously over the last few years once tablets started getting really good.

One study a couple of years ago suggested that phablet use is distinct from either smartphones or tablets—effectively, that they saw much more social networking use than either, but less of all other uses (sports, news & information, games, and playing media) than either. I’m a little doubtful of the study’s conclusions, especially given that so many more phablets have started being sold lately. But we’ll see.

With nearly the same screen size as tablets, and better screen resolution than even full-sized desktop monitors, phablet phones seem to be the form factor of the future when it comes to mobile device ownership in general and e-reading specifically. It should be interesting to see how the next few years of sales statistics turn out.