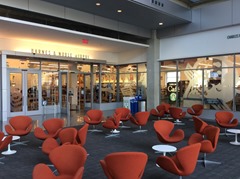 I happened to cruise by my local Barnes & Noble College bookstore today at IUPUI, about a half hour before closing time to look around. I had it in mind to take another in-person peek at the Nook devices they had on display there, but to my surprise, the display was nowhere to be found. The only Nook accessories I saw were some cases in the 50%-off clearance bin.

When I asked the clerk at the counter about this, he told me that the display had been removed two or three weeks ago, because the Nooks belonged to the branch of the business that ran the stores in the malls and they were really better suited to those stores—among other things, those stores had Internet access, and the campus Barnes & Noble didn’t. As far as he knew, they wouldn’t be available even by special order. 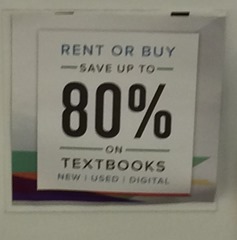 Downstairs in the textbook-and-school-supplies area, there were still some generic tablet cases and Bluetooth keyboards and the like, but no Nook-specific stuff here either that I noticed. The clerk here noted that the Nook hadn’t really been that good of a fit for a college bookstore, given that it dealt only with mass-market titles rather than textbooks. When I noted it seemed odd that Barnes & Noble wouldn’t go into digital textbooks given that it owned a branch of campus bookstores, she said that the bookstore did carry digital textbooks, but the provider of them just kept changing. 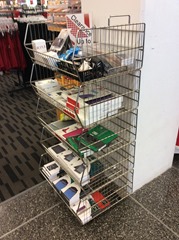 I came back home and ran a quick Google, but I wasn’t able to find any news articles anywhere suggesting that Nooks were being removed from Barnes & Noble College stores. I don’t even have any way of knowing if they actually are being removed from all campus stores or just this one—I wanted to call some other stores and spot check them, but in a quick survey of a number of listings on the bncollege.com web site wasn’t able to locate any other stores that have Sunday hours. (Though when I entered “Nook” as a search term on the web stores of several of them, it came up with no results.) With that in mind, I have emailed the media contacts for Barnes & Noble and the info contact for Barnes & Noble College asking about it, and will update if I hear anything back from them.

That being said, if true it’s not really a surprise. As far back as 2010, we reported that the B&N College Store division didn’t fully support the Nook because it’s a B&N Inc. product and the two units were different divisions. Now they’re entirely different companies, since Barnes & Noble announced and then finished spinning B&N College’s parent company off last year. 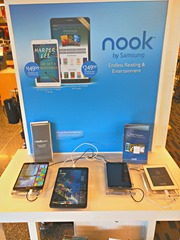 It seems a little odd that Barnes & Noble never tried harder to provide a college textbook solution for its own Nooks, given that it operated a chain of hundreds of college bookstores and at the very least could have licensed the Nook to them for that purpose—but perhaps it’s just another symptom of B&N’s waning support for the Nook in the interest of throwing as little good money after bad as possible.

In any event, the store’s departed display of Nooks, which I photographed when I visited the store in January, was kind of little and sad regardless—it didn’t even have enough power adapters to charge all four devices on display simultaneously. If that’s the best B&N College stores could do, perhaps it’s no great loss that it’s gone away.