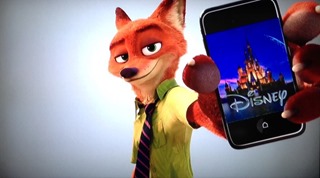 One of the things animated movies do especially well is hold a mirror up to life and see how it reflects. In Disney’s Zootopia, the mirror is largely focused on important issues of how a society made up of so many different peoples can get along, but one small facet of it centers on the way we use smartphones and tablets.

Without giving too much away, Zootopia is an odd-couple buddy cop drama that owes a lot to 48 Hours. It focuses on Officer Judy Hopps, a young rabbit who joins the Zootopia police department to try to make a difference in the world, and Nick Wilde, a con artist fox she dragoons into helping with a missing-persons investigation. But neither of them is really prepared for what they find…

I saw Zootopia yesterday in IMAX 3D and greatly enjoyed it. I recommend seeing it on as big a screen as you possibly can, as there’s some stunning animation on display. It’s got a 98% Fresh score on Rotten Tomatoes, and it came by that score honestly. It is rated PG, so may be too scary for some extremely young viewers.

Zootopia could be used as a text in a writing course on worldbuilding, as the animators did an amazing job of creating a largely-believable world in which the only intelligent beings are different anthropomorphic mammals. Unlike most funny-animal movies, which just put the animals in a world otherwise identical to our own, Zootopia imagines how different such a world would look. Everything from buildings to vehicles was designed to support the idea of different sizes of animal using it, and the level of care and attention to detail they put into it really shows. 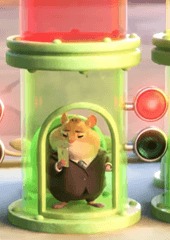 But not everything is so different. The denizens of Zootopia use smartphones and tablets—and the thing that interested me is that they use them just like we use them in the real world. All too often, Hollywood treats cell phones and smartphones like “Hollywood hacking lite”—they’re magical plot devices that do things and work in ways never seen in the real world. (Case in point: the 2004 movie Cellular, which made the titular cell phone into the mcguffin that drove the entire movie.) But that’s not the case in Zootopia.

First of all, smartphones are everywhere in this movie. They seem to be modeled after Apple’s iPhones, but instead of an apple they have a carrot-shaped logo on the back. There are also tablets labeled “iPaws”. Characters use apps, such as one that superimposes their own face over video of someone else. 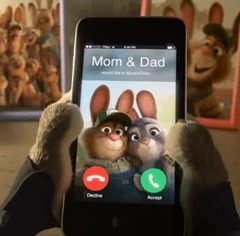 Judy Hopps has her own smartphone, as well. When its display is visible, it should look very familiar to anyone who’s ever used an iPhone—with “PB&J” standing in for “AT&T,” and her parents inviting her to chat via “MuzzleTime.” She also uses its flash as a flashlight while shooting video on the built-in camera. (Though I did have to bite my tongue to keep from complaining that she wasn’t holding the phone in landscape orientation while doing it.) 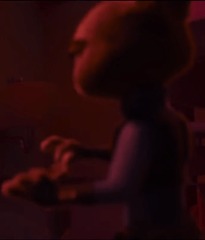 And while e-books don’t actually appear in Zootopia, one of my favorite tricks for e-reading does. In one scene, faced with an impromptu swim, Judy uses the age-old expedient of sealing her phone into a ziplock baggie to keep it safe. People think you can’t e-read in the tub? Even Disney knows how that would be done.

Even some of Zootopia’s promotional material gets in on it. The animation loop on Zootopia’s official website is from the point of view of Nick’s smartphone camera as he attempts to take a selfie and Judy keeps horning on. And Nick also takes a selfie in the first trailer, below. 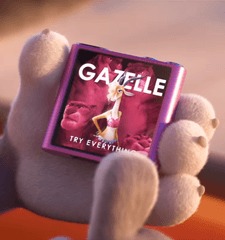 Smartphones aren’t the only digital devices featured in the movie, either. Early on, Judy uses an MP3 player to listen to music as she takes the train into the big city. Later, a digital voice recorder built into a ballpoint pen becomes an important plot point. At one point, Nick runs across some compact discs and wonders aloud who even uses those anymore.

But I suppose one of my favorite digital-media aspects of the movie came when the movie ended. Still enjoying the song “Try Everything” that closed out the movie, I tapped “Zootopia soundtrack” into Google Play on my smartphone. A few moments later, thanks to my streaming subscription, I was listening to the song again, and the Michael Giacchino score, before I even stepped out of the theater. I feel like I’m living in the future now.

I suppose this shows just how common and accepted smartphones really are now. They’ve finally reached the point where they can be depicted in movies as just an ordinary thing people use in ordinary ways. That certainly works for me—I’ve seen just about enough of smartphones serving as magical plot devices.