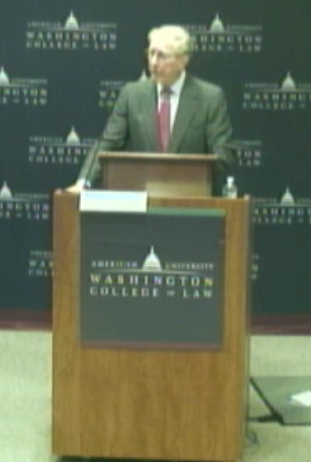 Are you curious how the Google Books fair use decision came about? Today Techdirt called my attention to a fascinating lecture by Judge Pierre Leval, one of the most important figures in the current interpretation of fair use, and one of the major motivators in the recent Google Books decision.

On Techdirt, Brandon Butler summarizes a 40-minute lecture by Leval during the Fourth Annual Peter A. Jaszi Distinguished Lecture in Intellectual Property at the American University Washington College of Law in which Leval discussed the modern history of fair use decisions from his point of view, and then explains exactly why the Google Books ruling to come out the way it did. Butler also links to a recording of the speech and I’m watching it now. (If you want to skip past the preliminaries, Leval’s remarks start at about 10:55 into the recording).

Early on, Leval explains, judges “ruled from the gut” on fair use issues, rather than hewing to any sort of established standard—including he himself. But after smarting from getting some decisions reversed, and observing the way prior Supreme Court decisions had made a hash of fair use, Leval wanted to try to straighten things out. Leval found it ridiculous that the Supreme Court had decided that any commercial use of copyrighted material was “presumptively” not fair use (given that many of the best-known fair uses, such as parody and journalism, were commercial), and that fair use required the user not to have an “evil heart.”

So, Leval wrote a seminal 1990 law journal article that formed the basis of modern fair use interpretation, “Toward a Fair Use Standard,” (PDF). Leval’s article, with the four-factor litmus test it proposed, was a major influence on subsequent court decisions, some of which he made himself.

The four-factor test requires judges to consider the purpose and character of the use, the nature of the copyrighted work, the amount and substantiality of the portion taken, and the effect of the fair use upon the potential market for the original work. For a work to qualify as fair use, the overall benefits to the public from the combination of those factors must outweigh the overall harm to the creator of the work.

Leval explains why Google Books is a case in point: it allows the public to search through twenty million books for specific words or phrases, and obtain limited information about the books and how to obtain the book from a library or seller. Leval describes Google Books in detail and the history of the court case to fill in why the court made the decision it did.

The talk doesn’t really lend itself well to summarizing in an article as short as this one, but the Techdirt summary is certainly well worth reading, and the speech itself is worth a listen—Leval is anything but a dry speaker, and his self-deprecatory, humorous style is extremely entertaining. I certainly recommend them for anyone who chokes on the idea that any project making a commercial use of the entirety of a work could be fair. After all, this is a chance to get an in-depth explanation of the new fair use philosophy straight from the horse’s mouth.

I think we owe Judge Leval a vote of thanks for effectively standardizing fair use copyright jurisprudence by effectively creating a reliable litmus test. This speech is a great chance to hear him explain why.